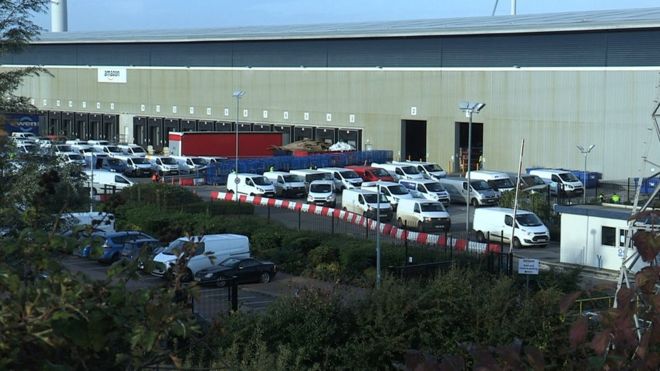 Amazon delivery drivers regularly work “illegal” hours and receive less than the minimum wage, it has been claimed.

Drivers for agencies contracted by the internet giant told an undercover reporter they were expected to deliver up to 200 parcels a day.

Some admitted breaking speed limits to stay on schedule, while others said time was not allowed for toilet breaks.

Amazon said it was committed to ensuring drivers drive safely and legally, and are “fairly compensated”.

The retailer could face questions in parliament over the working conditions at the company.

A BBC reporter got a job with AHC services, one of many agencies which supplies drivers to the firm’s delivery wing Amazon Logistics in the south of England, and which the BBC had heard a lot of complaints about.

During a two-week stint with AHC at Amazon’s Avonmouth depot in Bristol, he said he:

Several drivers told him they were paid the equivalent of an hourly rate below the national minimum wage of £7.20, mainly due to working long hours to deliver all the parcels they were assigned.

Some agency staff complained the system does not allow for traffic jams and does not factor in time for breaks, he said.

Former driver, Charlie Chikaviro, said the pressure to deliver parcels left him with no choice but to drive quickly.

“I had to, the way it was designed. You’re going to have to do that,” he said.

“I had a few crashes… but not bad crashes.”

Cody Cooper, a former supervisor who left AHC services a year ago, said she ordered one driver, who fell asleep at the wheel, to stop driving because she feared he could “end up killing someone”.

“It was coming up to school time and there could [have been] a group of schoolchildren walking along… and he could have steered off,” she said.

“I wasn’t willing to live with that.”

Amazon Logistics requires agency drivers to be self-employed, and therefore not entitled to the minimum wage or employment rights like sick pay or holiday pay.

Tonia Novitz, professor of labour law at Bristol University, said in her opinion drivers contracted by AHC should not be classed as self-employed, because they do not determine their own routes, days of work or rest periods.

“From the evidence I’ve seen, which suggests [the undercover reporter] would be regarded as a worker or agency worker, he should be getting the national minimum wage,” she said.

In a statement Amazon said: “As independent contractors of our delivery providers, drivers deliver at their own pace, take breaks at their discretion, and are able to choose the suggestion route or develop their own.”

The company said it expected drivers to be paid a minimum of £12 per hour “before bonuses, incentives and fuel reimbursements”, and it required independent delivery providers to ensure drivers were fully licensed and insured and obeyed “all applicable traffic and safety laws”.

In the past six months, drivers drove a daily average of 8.5 hours and were on duty for 9.1 hours, it added.

Oxford-based AHC dismissed claims put to them by the BBC as “historic and based on isolated examples which occurred over a year ago” and said: “Since then we have made changes to the way our checks are carried out and taken a number of steps to improve our ways of working.”

The firm said it took road safety and the welfare of its contracted drivers “extremely seriously”, and that drivers were free to choose when they worked.

Iain Wright, the Labour MP and chair of the Business, Energy and Industrial Strategy select committee, told the BBC: “These are serious allegations that call into question a lot of business practises carried out by Amazon.

“There are rising challenges in respect of what’s happening with online retail and ever growing customer demand.

“It’s a balance – it’s making sure that the customer gets what he or she wants, at a time that is suitable for them. But it shouldn’t be done on the back of exploitation of workers.”