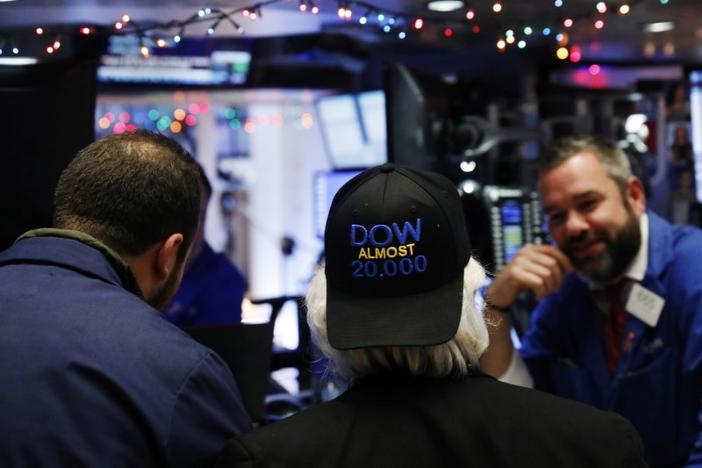 The Dow Jones Industrial Average declined on Monday, retreating from the historic 20,000 mark, weighed down by banks and energy companies, while a gain in technology stocks kept the Nasdaq afloat.

Eight of the 11 major S&P sectors were lower, led by the energy sector’s .SPNY 1.3 percent drop. Oil prices fell 2.3 percent as signs of growing U.S. output outweighed optimism that other producers were sticking to a deal to cut supply to bolster prices. [O/R]

The decline meant the Dow moved further away from the 20,000-point mark. It came tantalizingly close on Friday, hitting a record of 19,999.63 as the S&P 500 and the Nasdaq also touched records after a late pop in technology stocks.

The sector again helped the market on Monday.

“The market is building drama around 20,000 and if and when we get promising earnings reports, the Dow will go through the point like a hot knife through butter,” said Andre Bakhos, managing director at Janlyn Capital in Bernardsville, New Jersey.

Wall Street’s rally since Donald Trump won the U.S. election in November, with investors betting he will introduce business-friendly policies, has led to lofty valuations.

The S&P is trading at about 17 times expected earnings, compared to its 10-year average of 14. That could make investors cautious as they gear up for the fourth-quarter earnings season.

The first peek into how companies fared last quarter will be provided later this week by big U.S. banks. S&P 500 companies overall are expected to post a 6.1 percent increase in profit in the quarter, according to Thomson Reuters I/B/E/S.

Among stocks, Dow component UnitedHealth (UNH.N) lost 0.6 percent to $161.42 after the insurer’s Optum unit said it would buy Surgical Care Affiliates Inc (SCAI.O) for about $2.30 billion. Surgical Care’s stock was up 15 percent.

VCA Inc (WOOF.O), which runs hospitals for animals, soared 28 percent to $90.78 after Mars Inc said it would buy the company for $7.7 billion.