Bitcoin prices were lower Monday ahead of the much-anticipated tax deadline, which bullish pundits say has been holding back the digital currency this year.

The cryptocurrency was trading near $8,025.55 as of 2:03 p.m. ET Monday following its best week since February, according to CoinDesk. It has dropped more than 40 percent since Jan. 1, after starting this year above $14,000.

“Tax-selling has been a significant factor in downward crypto prices over the past few weeks. I would expect this downward pressure to abate after tax day,” said Spencer Bogart, partner at Blockchain Capital.

The Internal Revenue Service views bitcoin and other cryptocurrencies as property, meaning profits from transactions are subject to capital gains tax. Bitcoin rose more than 1,300 percent last year, and as a result, U.S. households will owe roughly $25 billion in taxes for digital currency holdings, according to Tom Lee, head of research at Fundstrat Global Advisors.

Lee, the only major Wall Street strategist to issue bitcoin price targets, said on Sunday that bitcoin may be hitting a similar bottom to where it was a month before it hit $20,000 in 2017. 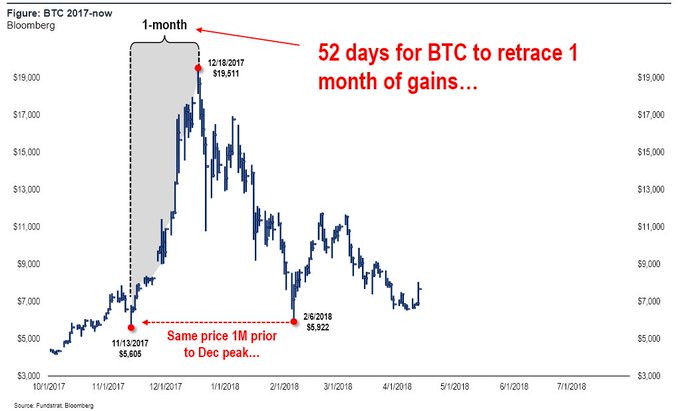 He has predicted that the cryptocurrency will hit $20,000 by the middle of the year and $25,000 by the end of 2018. Pantera Capital Founder and CEO Dan Morehead said in an investor letter published last week that bitcoin is “highly likely to have exceeded $20,000 within a year.”

Last week, the digital currency surged to its highest price since March. The move followed a spike from a low of $6,786 to above $8,000, which many traders attributed to investors covering their shorts, or buying back into the market after betting against bitcoin.

Other cryptocurrencies also recovered into Monday. Ethereum rose more than 26 percent over one week, while ripple rose roughly 30 percent to 65 cents, according to CoinDesk.