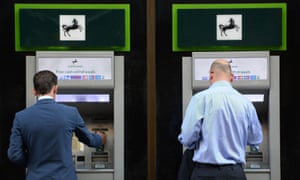 The major US investment firm Blackrock has become the biggest shareholder in Lloyds Banking Group, usurping the government, which is selling down its stake in the bailed-out bank.

Blackrock, which describes itself as the world’s biggest fund manager with $5.1tn (£4.1tn) of investments, now owns the largest stake in Lloyds as the Treasury’s holding has fallen to 5.95%.

The Treasury makes a disclosure to the stock market every time its stake in Lloyds falls by one percentage point and a previous update last month showed its holding had fallen below 7%.

In a stock market announcement on Monday, the Treasury said it had sold a further 700,000 shares to push its stake below 6%.

It did not disclose the price it received but the closing price of Lloyds shares on Friday, the day of the sale, was 65.68p. A sale at that price would have raised £460,000.

The chancellor, Philip Hammond, has sanctioned sales below the average price of 73.6p a share at which taxpayers bought a 43% stake during 2008 and 2009, when Lloyds was rescuing HBOS.

The government pumped £20.3bn into Lloyds and, even though it is now selling the shares below the average price paid for them, it has calculated it has received £18bn back.

Hammond said: “Confirmation that we are no longer the largest shareholder in the bank and that we’ve now recouped over £18bn for UK taxpayers is further evidence that we are on track to recover all of the £20bn injected into the bank during the financial crisis.”

Blackrock does not disclose its precise holding in Lloyds but stock market rules introduced in May 2015 required it to inform investors that it had risen above the 5% threshold.

The slump in Lloyds shares at the start of last year hammered the government’s plan to offer the public cut-price shares. A year ago, George Osborne had postponed the retail offering in the midst of a global stock market rout while Hammond called it off entirely after the vote for Brexit.

Lloyds has been trying to put its crisis-ridden past behind it. It announced last month it would spend £1.9bn buying MBNA, a credit card business, from Bank of America. António Horta-Osório, Lloyds’ chief executive, said the latest sell-off was a key milestone for the bank.

The government stake in Royal Bank of Scotland remains at 73% after Osborne sold off 5% in August 2015 at a £1bn loss.