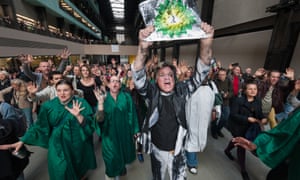 BP is to end its 26-year sponsorship of the Tate next year.

The oil firm blamed the “extremely challenging business environment” rather than years of protest against the sponsorship, the Independent reported.

Last summer protesters spent 25 hours scrawling climate change messages in charcoal on the floor of Tate Modern’s Turbine Hall. In November activists occupied part of Tate Britain, where they started to tattoo each other with the numbers of the CO2 concentrations in the atmosphere in the year they were born.

The art collective Liberate Tate, which staged the protests, said thousands of people had called on Tate to end its contract with BP on ethical grounds.

While BP say the decision to ends its Tate sponsorship is unrelated to climate protests, museum industry insiders say campaigners are having an effect as they turn the spotlight on the ethics of corporate funding
Read more

Group member Yasmin De Silva said: “We’re thrilled with the news Tate is rid of BP. About 30 years ago, the tide turned on tobacco sponsorship, and now the same thing is happening to the oil industry. Of course Tate won’t rub it in BP’s face by acknowledging this decision is the result of the increasing public concern about climate change and the huge number of artists, members and gallery-goers speaking out against the controversial deal.”

The revelation, which came after Tate lost a case at a freedom of information tribunal, put into the spotlight BP’s sponsorship of arts institutions, including the Royal Opera House, the British Museum, the National Portrait Gallery and the Royal Shakespeare Company.

A Tate spokeswoman told the Independent the sponsorship had been an “outstanding example of patronage and collaboration over nearly 30 years”. She said the company’s support “represents one of the most significant long-term corporate investments in UK arts and culture”, and expressed gratitude to BP for its “groundbreaking support of the collection displays and other programmes”.

A BP spokeswoman said the decision to end the sponsorship was unrelated to any pressure from activists. “They are free to express their points of view but our decision wasn’t influenced by that. It was a business decision,” she said, adding that were no plans to end sponsorship of other arts institutions.

Peter Mather, head of BP in the UK, said: “The decision to end our contractual relationship with the Tate has been a very difficult one. It reflects the extremely challenging business environment in which we are operating.

“We have seen the Tate’s extraordinary growth and success and we are proud to have played a small part in that.”

BP last renewed its sponsorship of Tate and other institutions in 2011. Tate director Nicholas Serota said at the time that his organisation had thought very hard about the sponsorship, and the board had “decided it was the right thing to do to continue with BP, who have been great supporters of the arts”.