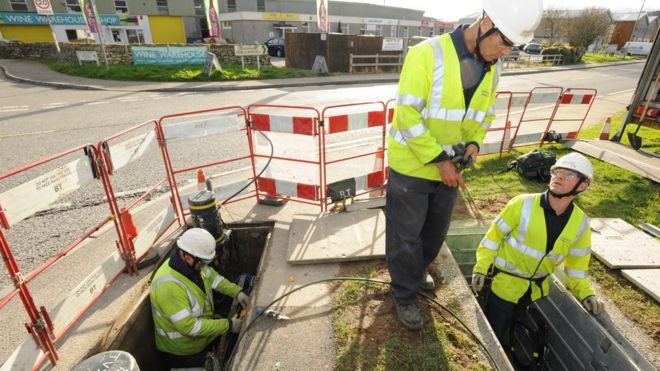 BT has condemned “excessive” new business rates, which it says will push up the cost of broadband services.

“We are extremely disappointed by the new rateable values, which are clearly excessive,” BT said.

But BT said: “It is highly likely that an increase of this size would lead to higher prices for consumers and businesses.”

The telecoms giant warned that if the proposed new rates are brought in, “it could have a negative impact on future investment in the network”.

That point was echoed by Virgin Media chief executive Tom Mockridge, who said: “The Chancellor Philip Hammond is choosing to side-step responsibility for a huge increase in infrastructure taxes, at the very moment after the Brexit vote the UK needs to maximise investment into its digital fibre network.”

BT said it will challenge the VOA’s “method and assumptions”.

“The Government has made it clear that it wants companies such as BT to invest heavily in the UK. We have stepped up to that challenge but we need a more joined up and logical approach from the public sector if there is to be a more conducive environment for investment,” the company said.

The proposed rates will be welcomed by many small businesses, which will see a drop in their charges.

That is because they have overpaid in recent years, as rates have been based on 2008 valuations which are now out of date, said the Federation of Small Businesses.

Chairman Mike Cherry said: “Many businesses across the country will be getting some relief from years of overpayment or see their rates remain steady.

“In other areas, there will be a big jump between the old valuation and the new one. To avoid such big discrepancies in payments, we believe more frequent valuations are necessary.”

But he added that transitional relief plans, which were announced by the government earlier this week, will help reduce some of the pain for those facing a big rate hike.

“It means that today’s revaluations could have big consequences, especially for those firms on the margins of these cut-off points,” said Mr Cherry.

Local Government Minister Marcus Jones said: “Local firms also need to be confident that the rates they pay are accurate and fair, no matter where they are in the country, and these updates will give them that reassurance.

“We are committed to helping all businesses flourish and as we make the system fairer up and down the country, nearly three quarters of companies will see no change, or even a fall, in their bills – including 600,000 who from next April will have their bills cut altogether.

“But for the small minority of businesses that do face an increase, we’re putting in place £3.4bn of transitional relief to provide vital support as they adjust to these changes.”