COMPANIES
November 18, 2017 Loknath Das awarded, barely, COMPANIES, compete, contracts, far, Federal, for, had, Half, in, of, Puerto, Rico, so, the, to 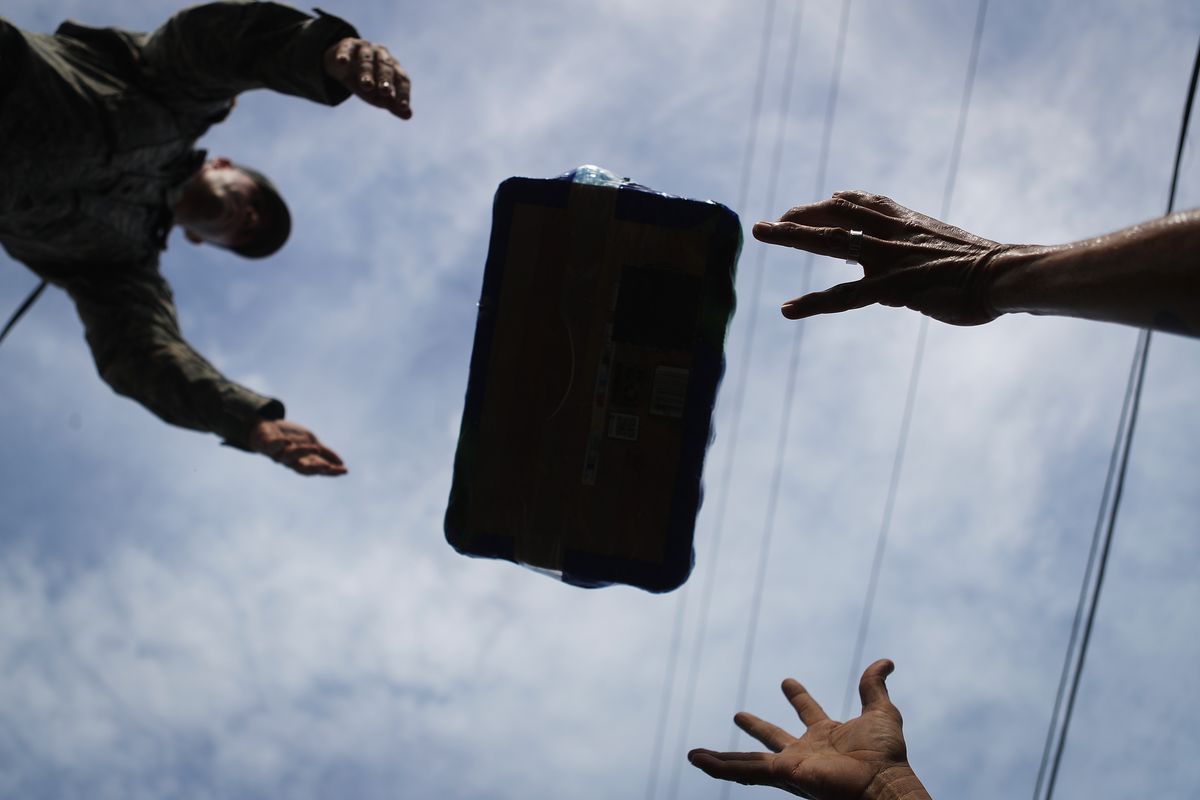 Now that Puerto Rico is moving into recovery and rebuilding after the Hurricane Maria disaster, billions of dollars in federal disaster spending are flowing to the island. Estimatesput hurricane damage at $95 billion, and Puerto Rican Gov. Ricardo Rosselló is asking various federal agencies for $94 billion in grants.

With this much public money on the line, monitoring how US tax dollars are spent in the recovery will be crucial to prevent waste, fraud, and shoddy work. The best way to do that is by awarding contracts through the open bidding process, which allows the largest number of businesses a chance to compete to offer the best deal. These types of contracts generally require more scrutiny and oversight than no-bid deals.

So far, competitive bidding hasn’t been a top priority for federal agencies responding to Hurricane Maria. Nearly half of the 540 federal contracts signed so far (as of November 16), totaling $252 million, were awarded outside the open bidding process, according to federal procurement data.

In most of these no-bid deals, federal contracting officers contacted only one business before giving them the contract; in some cases, they asked several businesses for price quotes before picking the best one. For instance, the Federal Emergency Management Agency awarded the biggest contract so far — a $122 million deal to feed hurricane survivors — to a Maryland-based company without contacting any other vendors. In this case, FEMA merely extended a smaller contract it had with the company to feed Hurricane Irma survivors in the US Virgin Islands.

On one level, it makes sense to do this. Federal agencies are responding to a humanitarian crisis, and they need to sign contracts quickly to get help to Puerto Rico and the US Virgin Islands quickly. Open bidding is a lengthier process with more steps. But it can be done quickly — some agencies were able to go through the full open bidding process for Hurricane Maria contracts in a matter of days.

Still, they don’t have much of an incentive to do so, and can avoid open bidding on smaller, urgent contracts if they can show that it would severely hinder their work. They don’t even have to call around for price quotes.

Federal agencies can also skip open bidding on larger contracts — those above $750,000 in disaster zones — if they can show that there’s only a small number of vendors who can provide the service or product they need, or to extend a current contract, known as a “follow-on deal.”

The danger of no-bid contracting grew clear in the botched power grid repair contract between Puerto Rico’s public utility company, PREPA, and Whitefish Energy, a tiny, inexperienced company from Montana. Congressional investigators said it raised “grave concerns about PREPA’s ability to competently negotiate, manage, and implement critical infrastructure projects without significant independent oversight.” While this contract was not awarded by a federal agency — and therefore was not included in the procurement data — PREPA expected to get reimbursed by FEMA grants. That means the contract still had to meet federal procurement standards.

When Hurricane Maria tore through Puerto Rico on September 20, the Category 4 winds knocked down cellphone towers and destroyed the power grid. The lack of electricity meant that most of the 3.4 million Americans on the island had no running water. It was a serious humanitarian crisis.

In the days that followed, multiple government agencies hired businesses to provide fuel trucks, meal kits, and charter flights for rescue missions. They ranged from small contracts, like the $1,733 deal to reactivate SIM cards on satellite phones, to major contracts, like the $118 million agreement with a Florida company to deliver 80 million liters of bottled water to Puerto Rico.

For the 262 contracts awarded as of November 16 that did not go through the open bidding process, the most common reason for not seeking price quotes from more than one business was “urgency.”

Normally, government agencies like FEMA can avoid the burdensome open bidding process for small contracts below $250,000. But in December 2016, President Obama signed the National Defense Authorization Act, which raised the threshold to $750,000 in emergencies, including federal disaster zones.

That’s how many government contracts for Puerto Rico — like the Justice Department’s $430,000 contract for charter flights, the Health and Human Services Department’s $536,000 contract for “logistical support,” and a $550,000 Homeland Security contract to rent fuel trucks in San Juan — avoided the competition and scrutiny that they would normally get.

These contracts were awarded through a simplified acquisition process, allowing some of the contracting officers to sign a deal without even getting multiple price quotes.

Karen Thornton, director of George Washington University’s procurement law program, said it doesn’t surprise her that so many no-bid contracts have been awarded. Federal agencies need some flexibility after a natural disaster, she said via email, but they also need to better train contracting officers to make sure they are not frightened into making “shortsighted” decisions.

This “often results in inferior quality, customer dissatisfaction, and a loss of public trust,” Thornton wrote in an email.

The need for a speedy contracting process after a natural disaster is clear. What’s not so clear is how much slower it is to award deals through the competitive bidding process.

Without open bidding, the government is creating an environment ripe for abuse.

One major problem with some no-bid contracts is that they get less scrutiny and oversight. For example, simplified acquisitions, which involve contracts below $750,000 (in disaster zones), don’t require a clause allowing the government to audit costs and review records to evaluate the company’s performance. They don’t require contractors to report potential kickback schemes, and they don’t have to meet certain labor and safety standards.

These types of contracts are relatively small in scale, but they make up a big chunk of the no-bid contracts awarded in Puerto Rico. And agencies, such as FEMA, have already gotten in some trouble for their lax oversight of federal contracts.

In 2014, the Government Accountability Office told FEMA that it needed to do more to evaluate the work of contractors in the National Flood Insurance Program. In the three major contracts reviewed by the GAO, FEMA didn’t put together a performance plan for one of them and didn’t submit performance evaluations for two of them. “By not reporting such information, FEMA disadvantaged the contractors and the government by not providing data that could be used in evaluating the contractors for future contract awards,” the GAO concluded.

Those were big contracts that required more scrutiny. Smaller, no-bid contracts have lower standards for review, which means they are even more prone to abuse. Since Hurricane Katrina hit New Orleans in 2005, federal agencies should have learned to set up more emergency relief contracts ahead of time in states prone to hurricanes and wildfires. That would give contracting officers more time to go through the bidding process, says Scott Amey, a procurement lawyer at the Project on Government Oversight, a nonprofit government watchdog group.

“If they keep entering into sole-source contracts because they have poor planning and poor disaster management, that’s on the agency, and they need to get their contracting office in order,” he said.

In the past, no-bid contracts awarded for urgency reasons were reserved for federal agencies working on military missions. But last year the Obama administration expanded the types of contracts that could fall into this category to include federal disaster zones.

And FEMA now relies more and more on no-bid contracts to respond to disasters. The agency awarded $200 million in single-source contracts in the fiscal year that ended September 30, the most since 2008, according to Bloomberg Government.

Vox’s review of procurement records shows that in response to Hurricane Maria alone, FEMA has awarded $61 million in single-source contracts — no-bid deals in which agencies only reach out to one business to make a deal.

According to Amey, no-bid contracts are risky and should be avoided. “You lose some transparency and lose certain cost and pricing data,” he said.

Puerto Rico’s notorious $300 million contract with Whitefish Energy to rebuild the power grid shows the potential danger of signing contracts without full competition. According to congressional investigators, the massive contract — awarded to a Montana company with two employees — overcharged PREPA for labor and included clauses making it hard to end the contract or conduct audits. That contract was awarded by PREPA with the understanding that FEMA’s public assistance grants would eventually cover most of the cost.

The governor of Puerto Rico ended up canceling the contract after details came to light. The FBI is investigating the Whitefish contract too. And a House committee is looking into a second no-bid energy contract PREPA awarded — a $200 million deal with Cobra Energy. That deal includes a similar clause prohibiting a government audit and waives liability if work is delayed.

Meanwhile, the people of Puerto Rico suffer. PREPA has to find another contractor to fix the power grid, and residents are left waiting longer to get the lights back on.