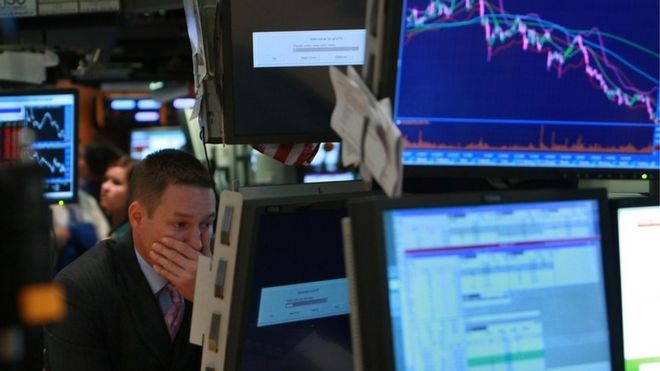 The failure to predict the financial crisis was a “Michael Fish” moment for economists, the Bank of England’s chief economist has said.

Andy Haldane compared financial forecasts to the famously inaccurate forecast by the BBC weatherman, ahead of the UK’s great storm of 1987.

He said the profession was “to some degree in crisis” following the 2008-09 crash and the Brexit vote.

The Bank denies claims it gave gloomy forecasts to support the Remain side.

Mr Haldane was speaking to an audience at the Institute for Government in London on Thursday, when he made the comparison between economists and weather forecasters.

He said economic models had been “rather narrow and rather fragile”, which was “fine as long as the going was good” but when the world was “tipped upside down” by the 2008-09 crisis, they had failed to cope.

“Turns out, that was a massive oversight,” he said.

“Could we find a way out of the trap? Of course we could. Let’s go back to a different crisis, which is the crisis, not in economic forecasting but in weather forecasting, that resulted from the 1987 storm.

“Much more data is being thrown at the problem and that has brought about a transformation. And some of the self same could be true if we move from weather forecasting to economic.”

Asked whether there had been the economic “hurricane” forecast after the Brexit vote, Mr Haldane quipped: “It’s been very windy in Spain.”

But he told the audience at the Institute for Government: “It’s true, again, fair cop. We had foreseen a sharper slowdown in the economy than has happened, in common with almost every other mainstream macro-forecaster.”

The Bank of England and the Treasury were accused by Brexit campaigners – including two former Conservative chancellors – of “peddling phoney forecasts and scare stories” during the EU referendum campaign to “frighten the electorate into voting Remain”.

Since the referendum, the UK economy has so far not performed as predicted, with GDP growth at a better-than-expected 0.6% between July and September.

However, the value of the pound has fallen about 17% since Britain voted to leave on 23 June.

Mr Haldane said the fact that the UK economy had held up better than predicted in the aftermath was a “thoroughly good thing”, putting it down to consumer confidence and the housing market.

He said it was “almost as though the referendum had not taken place” and that people’s spending power had not been “materially dented” in 2016.

But he added there were “reasonable grounds” for thinking 2017 might be a “somewhat more difficult year” for the consumer as the fall in the exchange rate began to affect prices. But he said there was “nothing inevitable” about that – it was just a “best guess”.

Transport Secretary Chris Grayling, who campaigned for a Leave vote during the EU referendum, told the BBC he was “very pleased” the Bank of England had “accepted it got it wrong” on its forecasts after the Brexit vote, and he had “no doubt they’ll learn the lessons”.

“There is a proud tradition in this country of economists getting it spectacularly wrong from time to time,” he said.

He added: “It’s a tribute to the work the government has done over the last six years that we still have the fastest growing economy in the G7.”

Bank of England Governor Mark Carney told the Treasury Select Committee last year that the Bank’s advice before the EU referendum had been “analytically based and objectively given”, adding: “It is not a political opinion, it is an economic opinion – it’s a judgement, it’s a judgement based on analysis.”

In 2012, on the 25th anniversary of his infamous weather broadcast, Mr Fish said he would be a happy man if he could “take every single copy of that [broadcast] to my grave”.

Referring to Mr Haldane’s remarks on Friday, as “Michael Fish” continued to trend on Twitter, the weatherman tweeted: “I reckon that Andrew Haldane, chief economist at the Bank of England, owes me a gold bar or two!”