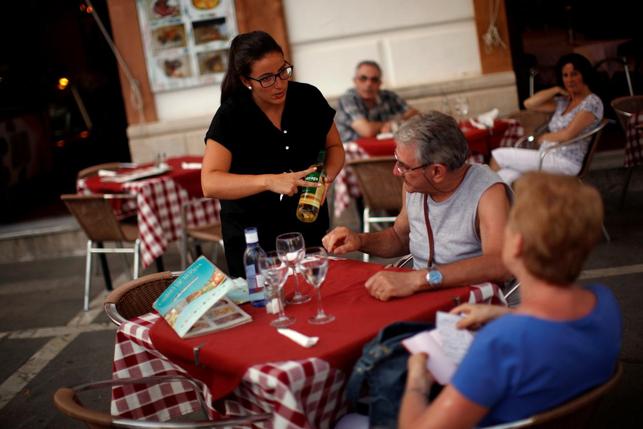 Aug 3 Euro zone business activity expanded a touch faster than thought last month, with the region appearing to have so far largely shrugged off Britain’s vote in late June to quit the European Union, a survey found.

But growth remained muted and was led by a surge in Germany, which masked a continued stagnation in France and a slowing pace in Spain and Italy.

Markit’s final composite Purchasing Managers’ Index for the euro zone, released on Wednesday, was 53.2 in July, above a flash estimate of 52.9 and June’s 53.1. It has been above the 50 mark that divides growth from contraction since mid-2013.

“A welcome uptick in the final PMI numbers presents a slightly better picture than the slowing signalled by the earlier flash reading, and is especially encouraging as it suggests the region saw little overall contagion from the UK’s ‘Brexit’ vote,” said Chris Williamson, Markit’s chief economist.

“However, the survey is still indicating only a modest 0.3 percent quarterly rate of economic growth at the start of the third quarter. Such a meagre pace of expansion will inevitably fuel speculation about what the ECB could and should do to boost growth, and when.”

Last month the European Central Bank left interest rates unchanged but said more stimulus could be on the way. A July Reuters poll suggested it would soon be forced to extend and expand the scope of its asset purchase programme.

Of some relief to policymakers, a sub-index measuring output prices jumped to a 10-month high of 49.8 from June’s 49.1, an indication firms barely cut prices. But inflation is nowhere near the central bank’s 2 percent target ceiling.

Growth in the bloc’s dominant service industry also ticked up from June. The PMI edged up to 52.9 from 52.8, higher than the flash 52.7 reading.

In a sign service firms expect a further improvement this month, they increased headcount at the fastest rate since early 2008. The employment index rose to 53.7 from 53.1.

“The improved hiring trend suggests firms have gained sufficient confidence in the durability and sustainability of the upturn to expand capacity in increasing numbers,” Williamson said.