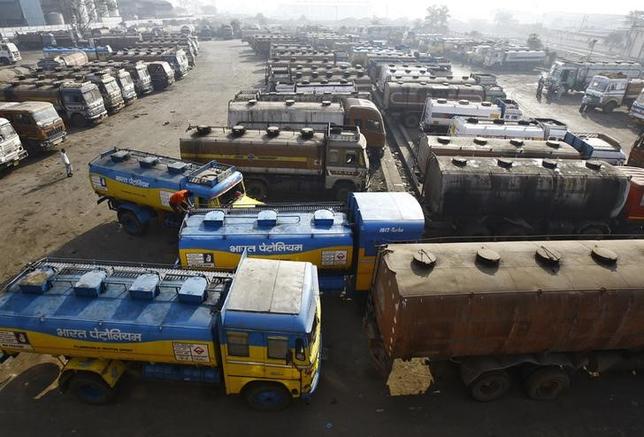 Oil tankers are seen parked at a yard outside a fuel depot on the outskirts of Kolkata February 3, 2015.
REUTERS/RUPAK DE CHOWDHURI

Government refiners are jointly negotiating oil purchase deals with OPEC producers for the first time, as the world’s third biggest consumer seizes on low prices to wrest better terms in a market awash with crude.

In a sign of the shift in power from oil sellers to buyers, India is reviewing its import policy at a time when OPEC members are focused more on protecting market share than boosting prices that are down some 70 percent in the last 20 months.

While producers have shown no sign yet of willingness to discount long-term price benchmarks, or official selling prices (OSPs), they have discussed concessions on loan terms and shipping that would reduce costs, said Indian industry and government officials familiar with the talks.

The four refiners together control about 60 percent of India’s 4.6 million barrels per day (bpd) capacity.

“Joint negotiation increases your bargaining power. When you jointly negotiate, even a customer of a small quantity gets the (same) advantage (as) buyers of huge volumes,” H. Kumar, managing director of MRPL, told Reuters.

The UAE, Kuwait and Saudi Arabia declined to give discounts on OSPs to Indian refiners, sources said, but there was some leeway on other commercial terms.

“UAE and Kuwait said they may increase the credit period, and offered concessions on shipping if Indian refiners raise volumes,” said an industry official privy to the talks.

“Saudi said they are open for discussion (on some terms) provided volumes are raised,” the official added.

State oil officials from the three exporting countries were not immediately available for comment on the talks.

India’s oil import policy was approved by the cabinet in 1979 and was last modified in 2001 to expand the list of companies that can supply crude there.

“The policy needs to evolve with the changing times … It is necessary to make the policy more flexible so that Oil PSUs (public sector undertakings) are able to procure crude oil at the best possible terms,” said an oil ministry official.

In the last fiscal year, IOC halved its term deal with Kuwait to about 100,000 bpd. An IOC source said that for the next fiscal year the company planned to restore volumes to about 200,000 bpd.

“If anybody goes for large volumes, obviously there could be some benefit,” said a source at a state refiner.

“We may not get a discount on OSPs, but we may get benefits in terms of operational issues like choice of grade, lay days, relaxation in opening of LCs (letters of credit), enhanced credit periods and others.”

For the remaining volumes, Oil Minister Dharmendra Pradhan said recently that the Indian cabinet would shortly approve the creation of a joint trading desk for state refiners.

The companies currently float spot tenders two months in advance of oil being lifted, missing out on the chance to secure cheaper crude on the spot market.

“The thinking is initially it will be a common trading desk, so a kind of hand holding will be there for us. Once we develop expertise, then we can move on our own. Eventually every company will have its own trading desk,” said the state refiner source.

In December, India’s oil ministry held a meeting of company officials on how to develop crude purchasing policy.

Under changes yet to be ratified by the cabinet, it was decided to allow state refiners to buy crude under term contract from Indian private firms or those companies’ foreign arms.

Private Indian oil companies like Reliance Industries and Essar Oil are not bound by government rules and are free to tap markets as they choose.