The Australian Rugby Union says financial reasons were behind their decision to cut the Western Force rather than the Melbourne Rebels from the Super Rugby competition.

On a dramatic day, ARU boss Bill Pulver announced he would stand down as soon as a replacement could be found.

Pulver has had to deal with plenty of negative comment after his organisation announced on April 10 one of the local five Super rugby teams would be cut. Heath Tessmann of the Force poses for a selfie with a supporter after winning the round two Super Rugby match against the Queensland Reds.

“It has been a harrowing process so my sense is it’s a good time for renewal, said Pulver whose five-year term expired next February. 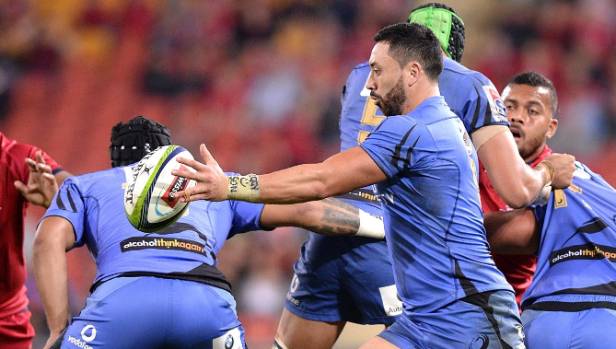 The Western Force won their last two matches against the Melbourne Rebels and NSW Waratahs.

Rugby Union Players’ Association boss Ross Xenos described the decision as the “darkest day in the history of Australian Rugby”.

The announcement came following the result of arbitration involving the ARU and Rugby WA, though neither side wanted to divulge the findings of last week’s two- day hearing

RugbyWA will take out an injunction against the ARU’s decision.

If the Force win a right of appeal, they will take the case to the Supreme Court.

RugbyWA will also consider mounting legal action relating to the circumstances which led it to enter into the ‘Alliance’ agreement last year with the ARU.

Asked why the Force asked were cut rather than the Rebels, Pulver said: “We did an exhaustive analysis, a massive spreadsheet on all the variables that went into this decision.

“Some of them community-based, some of them high-performance based and frankly at the end of the day the best decision for Australian rugby was to remove the Western Force.

“Financially it made the most sense.

Billionaire Andrew Forrest, who on Friday described the ARU’s decision as “retrograde” and “illogical”, has reaffirmed his pledge to do everything within his powers to save the Force.

ARU chairman Cameron Clyne said while the Force had run an enthusiastic and public campaign it would have been wrong to assume there wasn’t the same level of enthusiasm in Melbourne.

“There has been a lot of public support and a lot of genuine financial support from people in Melbourne that have come out,” he said

‘Whilst we do appreciate people like Andrew getting involved it came very late in the piece.

“Part of the issue was the Force were virtually bankrupt and had to be bailed out.”

Every Australian team lost more than they won in 2017 and for the second- straight year no local side made the semi-finals.

The Rebels won just one game, while the Force never made the finals in 12 attempts.

Clyne felt having four competitive teams would give Australian more bargaining power in having a say over the controversial competition format.