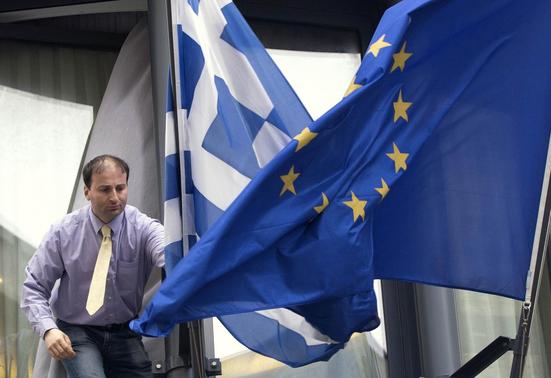 (Reuters) – Germany rejected a Greek proposal for a six-month extension to its euro zone loan agreement on Thursday, saying it was “not a substantial solution” because it did not commit Athens to stick to the conditions of its international bailout.

Berlin’s stance, describing the carefully worded Greek letter as a “Trojan horse” for shirking commitments, set the scene for tough talks at a crucial meeting of euro zone finance ministers on Friday. Greece’s leftist-led government is scrabbling to avoid running out of money within weeks and will face pressure to make further concessions in Brussels.

As the biggest creditor and EU paymaster, Germany has the clout to block a deal and cast Greece adrift without a lifeline, potentially pushing it towards the euro zone exit. But some officials in other capitals saw the German response as tactical and forecast agreement by the weekend after more wrangling.

Nonetheless, despite warm words from those who saw the Greek move as a step forward, Athens remained isolated after a meeting of euro zone officials to prepare Friday’s talks, sources close to the negotiations said. All agreed with Germany that Greece must commit more clearly to abiding by its current credit terms.

A Greek official said Prime Minister Alexis Tsipras had a 50-minute telephone call with German Chancellor Angela Merkel on Thursday, believed to be their first substantive exchange since the Athens government was elected on Jan. 25.

“The conversation was held in a positive climate, geared towards finding a mutually beneficial solution for Greece and the euro zone,” the official said. A German spokesperson confirmed the call but would not comment on the content.

Tsipras also spoke to French President Francois Hollande, who, according to a Greek official, promised to raise the issue with Merkel when she visits him in Paris on Friday.

Earlier, Finance Minister Yanis Varoufakis formally submitted the request after days of backstairs negotiations with the European Commission and the chairman of the Eurogroup of finance ministers of the currency bloc.

While officials in Brussels, Paris and Rome welcomed the effort by a government elected on an anti-austerity platform to find a workable formula, German officials said it was full of loopholes with no commitment to respect the bailout terms.

Finance Minister Wolfgang Schaeuble’s spokesman said the Greek proposal did not meet the criteria agreed by the Eurogroup and “goes in the direction of a bridge financing without fulfilling the demands of the programme”.

Economy Minister Sigmar Gabriel said what mattered was what economic reforms Greece was prepared to make, adding: “The letter can only be the start of negotiations.”

The objections from Berlin drew a tart response from Athens, which questioned whether Germany spoke for the other euro zone finance ministers, whose aides were already in Brussels looking at the options during a meeting on Thursday afternoon.

“Tomorrow’s Eurogroup has only two options: either to accept or reject the Greek request,” a Greek official said. “It will then be clear who wants to find a solution and who doesn’t.”

A German paper prepared for Thursday’s meeting of euro zone officials and seen by Reuters said the request was no basis for even starting to draft an accord on Friday. [ID:nL5N0VT547]

“The Greek letter is not clear at all, but opens immense room for interpretation,” it read. “It … represents a Trojan horse … in substance putting an end to the current programme.”

With Greece’s EU/IMF bailout programme due to expire in little more than a week, Tsipras urgently needs to secure a financial lifeline to keep the country afloat beyond late March.

Athens asked for an extension to its “Master Financial Assistance Facility Agreement” with the euro zone, rather than the full bailout programme as euro zone governments led by Germany have insisted. Tsipras, who won power promising to ditch the bailout, is trying to secure funding without accepting all the demands for austerity and painful economic reform which are conditions of the EU/IMF programme.

U.S. Treasury Secretary Jack Lew spoke by telephone on Thursday with his Greek, Dutch and French counterparts, urging all sides to make concessions in the talks.

NOT TO BERLIN’S LIKING

Berlin can count on the support of north European fiscal hawks such as Finland and the Netherlands but also countries such as Spain and Portugal which have imposed austerity measures in return for aid and do not want Greece to get a softer deal.

But Greece also has sympathisers. Italian Economy Minister Pier Carlo Padoan warned of the risk involved in any Greek exit.

“We have to send a signal that the euro is irreversible,” he told the magazine l’Espresso. “If a country were to leave, it wouldn’t just mean one less country in the union but the transformation of the euro into a mechanism that can be undone.”

Italian Prime Minister Matteo Renzi, a socialist who like Tsipras is aged 40 and still new to government, spoke to his Greek counterpart on Thursday, an Italian official said. Renzi also spoke to European Commission President Jean-Claude Juncker, a euro zone veteran, who has been trying to mediate.

In France, co-creator of the euro with Germany, Socialist Prime Minister Manuel Valls called the Greek move “a very encouraging sign that a solution is possible, and very quickly”.

Credit ratings agency Standard & Poor’s said a Greek exit would be less financially risky for the remaining euro zone members than it would have been during the last scare in 2012. Since then, policymakers have introduced the European Stability Mechanism, which could help governments under market pressure if Greece were to leave, it noted.

In the letter seen by Reuters, Greece pledged to meet its financial obligations to all creditors, recognise the existing EU/IMF programme as the legally binding framework and refrain from unilateral action that would undermine the fiscal targets.

It accepted that the extension would be monitored by the European Commission, European Central Bank and International Monetary Fund, a climbdown by Tsipras who had vowed to end cooperation with “troika” inspectors accused of inflicting deep economic and social damage on Greece.

However, the document stopped short of accepting that Greece should achieve a primary budget surplus, excluding debt service, equal to three percent of the country’s annual economic output this year, as promised under the bailout deal.

Tsipras wants to cut that to 1.5 percent to allow more spending to ease the plight of the poor. The document spoke only of attaining “appropriate primary budget surpluses”.

Crucial details remain to be clarified on the fiscal targets, labour market reforms, privatisations and other measures due to be implemented under the existing programme.

The six-month interim period would be used to negotiate a long-term deal for recovery and growth incorporating further debt relief measures promised by the Eurogroup in 2012.

Greek stocks initially rose on Thursday’s developments, with the benchmark Athens stock index up 2 percent but it slipped back after the German statement, closing up just 1 percent on the day. Banks gained 9 percent but then shed much of that.