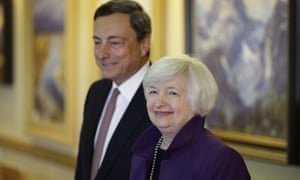 Global regulators have postponed a meeting to agree major reforms to the banking sector prompted by the 2008 crisis.

A leading group of central bankers was due to meet on 8 January to agree changes that could have forced some banks, largely in Europe, to hold more capital, but it was announced on Tuesday that the meeting had been called off.

No new date was given for the meeting of the group of central bank governors and heads of supervision (GHOS), which was due to discuss rules that influence how much capital banks hold and the way they measure the risks they are taking.

It was reported that the US had been pushing for tighter measures despite concern from European regulators that any further restrictions might impede lending.

The postponement comes just weeks before Donald Trump is inaugurated as US president. Trump has discussed the need to change banking regulation.

The GHOS, chaired by Mario Draghi, the president of the European Central Bank, oversees the Basel committee, the forum where central bankers meet to discuss banking reform.

The group said “more time is needed to finalise some work, including ensuring the framework’s final calibration, before the GHOS can review the package of proposals.

“A meeting of the GHOS, originally planned for early January, has therefore been postponed.”

Stefan Ingves, the Swedish central bank governor who chairs the Basel committee, said it would keep working to “finalise its reforms aimed at fixing shortcomings highlighted by the financial crisis to make banks safer and more resilient”.

The difficulties in clinching agreement have been simmering for some time, but in a speech last month Ingves had said the committee was on track to finalise the reforms, known as Basel III, by the end of 2016.

The changes relate to banks using their own internal models to measure their risks and the impact this has on risk reduction.

Draghi said: “Completing Basel III is an important step towards restoring confidence in banks’ risk-weighted capital ratios, and we remain committed to that goal.”

Sir Howard Davies, a professor at the Paris Institute of Political Science, wrote last week that agreement had “ so far proved impossible”.

Davies, who is also chairman of Royal Bank of Scotland, said: “The Europeans argue that their banks’ corporate lending is inherently less risky.”