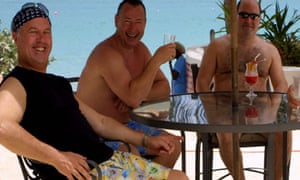 A group of bankers who ran an “utterly corrupt scheme” that left hundreds of small business owners “cheated, defeated and penniless” have been sentenced to almost 50 years in jail.

Lynden Scourfield, a former senior HBOS manager, was sentenced to 11 years and three months in prison after the judge found he had “sold your soul, for sex, for luxury trips with and without your wife – for bling and for swag”.

Scourfield, 54, was jailed on Thursday after pleading guilty to the extensive scheme that drained the bank and small businesses of around £245m and left hundreds of people in severe financial difficulties.

Judge Beddoe described Scourfield as an “utterly corrupt bank manager” who, driven by “rapacious greed”, had “got his tentacles into the businesses of ordinary and honest people and ripped them apart without a thought for those affected”.

Five of Scourfield’s partners in the multi-year scheme – the proceeds of which were spent on lavish parties, superyachts and sex parties – were also sentenced, bringing the total jail time to 47-and-half-years.

Sentencing Scourfield, Beddoe said: “I do not know when or how David Mills got his hold on you, but that he did. He is the devil to whom you sold your soul, for sex, for luxury trips with and without your wife – for bling and for swag.”

During the four-month trial, one woman giving evidence said she worked at a pornographic magazine company under Scourfield’s portfolio and was asked to arrange girls to come to parties for the “posh twat banker friends”. A sex worker told the court that Scourfield resembled the actor Danny DeVito.

A diary entry from one of the sex workers read: “Met guys, me, Amber and Suzie. Chinese meal. Then drinks at flat and quick shag. Easy £1,500.”

The jury also heard how, apart from funding the evening entertainments, Mills also applied to have a second card on his American Express account, which was issued under Scourfield’s name.

Also sentenced were Michael Bancroft, 73, who was jailed for 10 years; Mark Dobson, 56, for four-and-a-half years; and John Cartwright, 72, for three-and-a-half years for their various roles in the fraud between 2003 and 2007.

Mills’s wife Alison, 51, also played a major role in the corruption and was sentenced to three-and-a-half years. The Mills owned a £2m superyacht called Powder Monkey which the prosecution said was funded by the elaborate fraud scheme.

Some of the victims lost their companies, livelihoods and even their homes as a result of the scam.

Paul and Nikki Turner, from Cambridge, were ignored for years when they tried to report what was going on after their publishing company, Zenith, was run into the ground in the scam.

“They defrauded us, denied for 10 years that the fraud had happened, ignored the debt from the fraud and tried to evict us 22 times in order to cover up the fraud,” Mrs Turner said.

“It’s a huge success for us that the trial has gone on. The other victims have gone through terrible things, they have gone through the loss of businesses and lost homes. Other people lost everything, including marriages broken up, because of this.”

The courtroom was packed with victims and their supporters, who erupted into applause and cheers when the sentences were passed.

Beddoe said Scourfield had not shown a “shred of remorse” for ruining the lives of the employers and employees of those companies. He said the scheme “ripped apart those businesses without a thought for the lives and livelihoods of those affected in order to satisfy their rapacious desire for money and the trappings of wealth”.

He added: “People haven’t just lost money but in some instances their homes, family and friends. People who could have expected to be comfortable in retirement were left cheated, defeated and penniless.”

Mills lavished the Scourfields with clothes, jewellery, luxury hotel stays, business-class flights and expensive meals at an oyster bar and a cheesecake restaurant. His wife invited Dobson and the Scourfields to go on trips to Ascot, while Mills, Bancroft, Scourfield and their wives holidayed together in Barbados to celebrate her 40th birthday.

Many of the victims said they were going to continue to press Lloyds BankingGroup, which took over HBOS during the 2008 banking crisis, for compensation, claiming that the bank knew about the wrongdoing earlier and failed to investigate properly. The bank denied this.

Lloyds said it would review individual customers cases and may pay out some relief. “Whilst we have fully reviewed customer concerns raised previously, we will review any new concerns on a case-by-case basis taking into account any relevant new information from the trial,” the bank said.

Stephen Rowland, specialist prosecutor from the CPS specialist fraud division, said: “Many people have had their lives ruined by the corrupt behaviour of Lynden Scourfield, David Mills and their associates. Scourfield worked in a section of his bank which was supposed to help struggling businesses but instead, motivated by greed, he went about stripping them of their assets.”