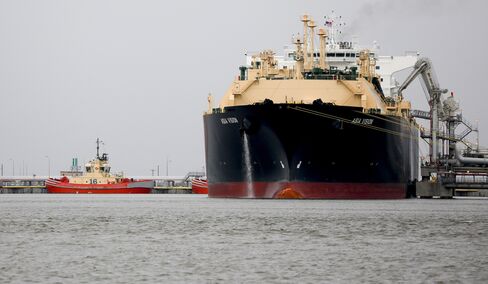 That’s how many cargoes of natural gas it’d take to wipe out the ever-expanding glut of the heating and power-plant fuel in the U.S. A mild winter and production still flowing out of America’s shale formations have inventories swelling compared with previous years, dragging down U.S. gas prices even as the first export of shale gas prepares to leave from Cheniere Energy Inc.’s Sabine Pass terminal in Louisiana today.

“Production keeps going and right now we are pricing in a natural gas-ageddon,” said Phil Flynn, senior market analyst at Price Futures Group in Chicago. “How many tankers do we need to to get rid of the glut?”

It’d take at least 163 tankers the size of the Asia Vision, the vessel now at Cheniere’s docks, to bring U.S. gas inventories back to the five-year average. If you lined them up end to end, they would stretch almost 30 miles (42 kilometers).

Initial export volumes will be too small to make a dent in the U.S. supply surplus anytime soon, said Jason Schenker, president of Prestige Economics LLC in Austin, Texas.

“It’s hard to find much of a bullish story,” Schenker said. “We see low natural gas prices for the balance of this year.”

Natural gas futures were up 1 percent, or 1.7 cents, at 1:12 p.m. New York time to $1.799 per million British thermal units on the New York Mercantile Exchange.