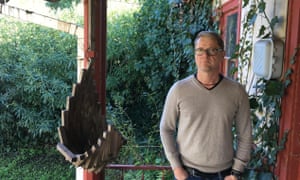 Lights flashing, three police cars showed up to Bill Montes-Pack’s quiet suburban street on the morning of 15 December 2015. The Benicia, California, man had stayed up all night waiting for the sheriff’s office to evict him from the house his grandparents had owned since 1971.

“It was really, really traumatic,” Montes-Pack recalled one year later. Standing outside the locked front door, the 49-year-old peered into the empty living room that holds his earliest Christmas memories and surveyed the overgrown ivy damaging the house’s facade.

The foreclosure – which he said was based on a predatory loan and improper paperwork – originated with lender OneWest Bank, at the time run by chairman and CEO Steven Mnuchin. The veteran Wall Street financier’s foreclosure practices are receiving fresh scrutiny this week after president-elect Donald Trump announced him as the nominee for US Treasury secretary.

“Rather than shaking up Wall Street, he installs the very person that was part of the financial mess,” said Montes-Pack, who has effectively been homeless since the foreclosure. “I’m just thoroughly disgusted.”

Mnuchin, who is also a Hollywood movie producer, earned the nickname “foreclosure king” after he purchased distressed mortgages during the financial crisis and evicted thousands of homeowners.

The former Goldman Sachs banker, worth an estimated $40m, has no government experience, and critics worry that, as Treasury secretary, his policies could benefit the wealthiest people and roll back critical bank regulations.’

One controversial source of OneWest foreclosures is the corporation’s reverse mortgages, which are loans to elderly homeowners that enable them to borrow against their home equity. These types of mortgages have been aggressively marketed to seniors as a way to help them stay in their homes, but some don’t understand the risks and can’t afford associated fees.

In 2006, Montes-Pack’s grandparents bought a reverse mortgage from IndyMac Bank, the predecessor to OneWest, which he said took advantage of his grandfather, who suffered from dementia.

After his grandparents died in 2012, Montes-Pack moved in, but the corporation – by then OneWest and run by Mnuchin – quickly began foreclosure proceedings.

The bank’s case, he said, relied on a document signed with the name “Bryan Bly”, who has been widely reported in numerous investigations as a so-called “robo-signer”. Robo-signers are individuals whose signatures are wrongfully used to automatically authenticate thousands of mortgage documents that they haven’t read and are in some cases falsely notarized.

His family is still fighting the foreclosure, but in the meantime Montes-Pack’s mother has been forced to live in a nursing home.

The California Reinvestment Coalition, a non-profit that has scrutinized OneWest, found through public records requests that the bank disproportionately foreclosed on seniors. The firm was allegedly responsible for 39% of reverse mortgages in recent years even though it only has 17% of the market.

From 2009 to 2015, the bank was responsible for more than 36,000 total foreclosures in California, according to the coalition.

Julie Cheney, a California resident whose parents lost their home to a OneWest foreclosure stemming from a reverse mortgage, testified againstOneWest before it merged with a company called CIT Group last year. (Mnuchin earned millions from the sale).

“It’s so wrong,” Cheney said, explaining that the bank sold her parents a mortgage they didn’t need while her father was dying of cancer and on pain medication and her mother was suffering from Alzheimer’s disease.

Her family’s unsuccessful court battle against OneWest was a huge strain on her mother right before she died, Cheney added. “It was the worst time of my life.”

“It’s unimaginable. People are still traumatized from the death of their loved one,” she said, “and then they are faced with the second largest loss, which is the roof over their head.”

CIT Group and Trump’s transition team did not respond to requests for comment.

Foreclosures aren’t the only way OneWest has inflicted harm on vulnerable people, according to critics.

In November, two non-profits filed a complaint against the bank, alleging that it has violated the Fair Housing Act by failing to locate branches in communities of color and providing disproportionately low rates of loans to Asian Americans, African Americans and Latinos in California.

In non-white neighborhoods, OneWest was far more likely to foreclose on homes than make loans available, according to the charges, which claim that in 2014 and 2015, the corporation offered only two loans to black borrowers.

The complaint, which calls for an investigation by the US Department of Housing and Urban Development, further accuses the corporation of allowing foreclosed properties to become blighted and abandoned in communities of color, while properly maintaining and marketing homes in white neighborhoods.

“There is a very high price to pay in terms of the health and safety of the neighborhood,” said Caroline Peattie, executive director of the Fair Housing Advocates of Northern California, which filed the complaint alongside the reinvestment coalition.

In white neighborhoods, OneWest properties generally had “manicured lawns, securely locked doors and windows, and attractive, professional, ‘for sale’ signs posted out front”, according to the complaint. In communities of color, the foreclosed houses “were more likely to have trash strewn about the premises, overgrown grass, shrubbery, and weeds, and boarded or broken doors and windows”.

Blighted properties can attract garbage, crime and public safety hazards, she said, adding that studies have found that living near foreclosures is linked to higher blood pressure.

“It’s as if a lender has turned the person’s home into a piece of trash,” said Brown. “Any lender who does not maintain the property is victimizing the entire neighborhood.”