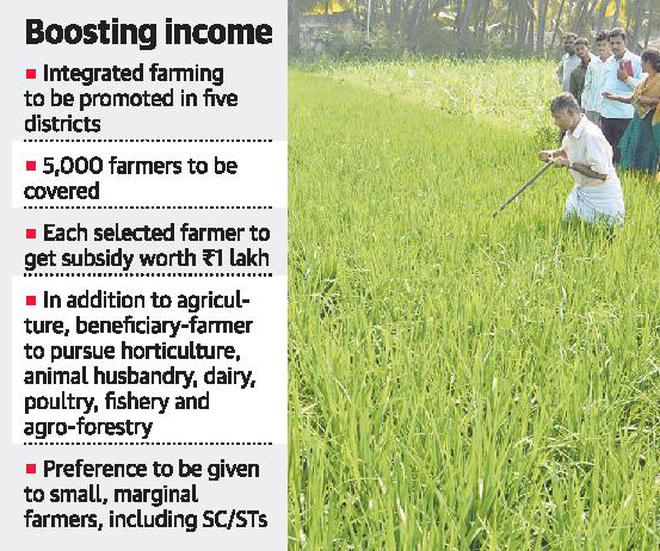 Under new system, farmers will take up various activities

The State has come out with its own variant of the concept of “doubling farmers’ income,” through the integrated farming system (IFS). To be implemented as part of the National Agriculture Development Programme (NADP), the IFS would require every beneficiary-farmer to undertake a host of activities, apart from agriculture, so that he or she gets a higher income than what he or she has been earning under the conventional way of farming.

Last week, the State issued two orders in this regard. To motivate agriculturists to make use of the scheme, a heavy dose of subsidy has been proposed. On an average, each beneficiary-farmer would get subsidy worth ₹1 lakh under various components. For example, each beneficiary is entitled to have two milch cows, for which the government would give a subsidy of ₹17,500 per cow or 50% of the cost of purchasing the cow, whichever is lower.There were other components such as agro-forestry, fishing, poultry and vermi-composting, each of which carried a subsidy, said a senior official of the Agriculture Department, adding that beneficiary-farmers would also have to meet fifty percent of the expenditure for the programme.

Initially, five districts – Tirunelveli (Manur block), Madurai (Thirumangalam), Thanjavur (Thiruvonam), Villupuram (Tindivanam) and Erode (Perundurai) – have been selected. Small and marginal farmers would be encouraged to take part. Asked how the latest scheme differed from earlier programmes such as Iamwarm (Irrigated Agriculture Modernisation and Water Bodies Restoration and Management), the official said that this time, the focus was on organised and holistic coverage of allied activities of agriculture, unlike in the previous attempts. The State was confident that if the selected made optimal use of the scheme, their income would be augmented, said the official.

Pointing out that the State Animal Husbandry Department would also play a key role in implementing the new scheme, the official said institutions such as the Tamil Nadu Agricultural and Fisheries Universities would be important partners in the programme. An amount of ₹25.6 crore had been set apart for the purpose, added the official.