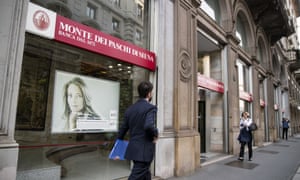 Italy is prepared to launch a multibillion-euro rescue of Monte dei Paschi di Siena (MPS) by the end of this week if the bank fails in its last-ditch effort to secure €5bn (£4.2bn) from private investors, according to a finance ministry official.

The official told the Guardian the ministry was “fully confident” that the world’s oldest bank would be able to carry through its plans to bolster its financial strength without recourse to the taxpayer.

“We are confident that the full plan works. So far we can only wait and see,” the official said. “We think MPS will be able to raise capital on the markets over the next few days.”

Shares in Italy’s third largest bank have seesawed in recent days amid uncertainty about how it will meet regulator’s demands to find more capital after it was the weakest performer of any of the 51 banks tested by the European Banking Authority in an annual health check of the sector in July.

MPS had asked the European Central Bank for an extension from the end of the year to 20 January to find the extra capital. The ECB is reported to have rejected such a move, which raised fears that the Italian government would have to intervene and on Friday drove its shares down 10%. But on Monday the shares were up 3.5% after MPS said it would press on with its existing plans to find funds. This includes a debt-for-equity swap and also a cash call to raise about €2bn from investors.

Fears about the strength of Italy’s banking system, which is weighed down by €360bn of bad loans, have focused on MPS. But UniCredit, Italy’s biggest bank, is expected to announce on Tuesday its intention to tap investors for about €13bn when its chief executive, Jean-Pierre Mustier, meets investors in London. Any cash call by UniCredit would take place early next year, by which time the European authorities will have hoped to plug the gap at MPS.

If MPS fails to secure a rescue by private investors in the coming days, Italy would embark on a precautionary recapitalisation, the finance ministry official said. Such a move would cost Italy between €2bn and €4bn and would fall under EU rules that forbid state intervention unless bondholders first take a hit.

The private sector plan is being led by Wall Street bank JP Morgan and is thought to require a major investor – such as the sovereign wealth fund from Qatar – to commit about €1bn. However, it is thought that an investment on that scale would not be made until the political uncertainty sparked by the resignation of the prime minister, Matteo Renzi, abates.

Paolo Gentiloni, the foreign minister in Renzi’s government and now prime minister-designate, is in the process of forming a new government – a move that could make it easier to attract investors to MPS. The private capital injection ought to be launched by the bank this week and any intervention by the Italian government – if it becomes necessary – would not take place before this Friday or next Monday.

While retail investors who hold €2.1bn of bonds in MPS might incur losses through a state intervention, Italy could probably seek an arrangement in which those bondholders would eventually be compensated. The prospects of tens of thousands of ordinary Italians losing their savings is one reason why such a rescue has been politically toxic even though MPS has long been considered the weakest bank in Italy.

The problems facing Italy’s banks are reflected in forecasts for the country’s economic growth. The ratings agency Standard & Poor’s forecast for growth in the eurozone’s third largest economy will fall below 1% over the next two years.