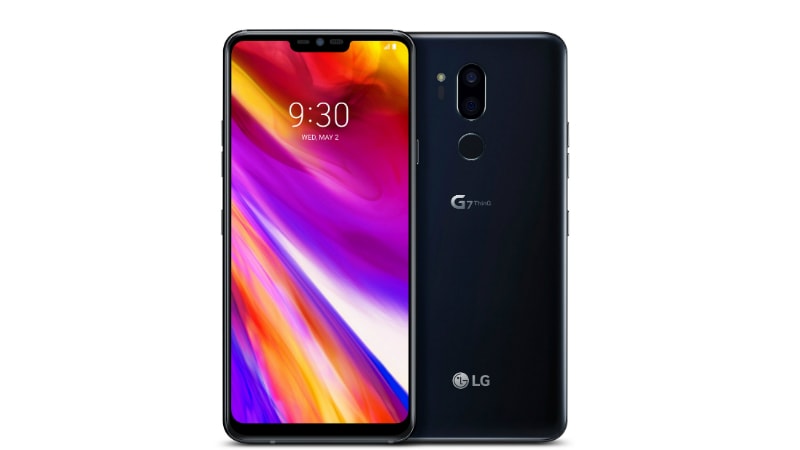 LG G7 ThinQ launch is set for May 2 in New York and May 3 in Seoul. The South Korean giant’s hopes are set largely on the launch of its new flagship as it looks to streamline its smartphone offerings in the market. With less than a week to go before the official unveiling, the company has started teasing the handset in videos and posters through official channels. Apart from that, press renders of the phone’s Black colour variant are out. And, lastly, spy shots reveal functionality of the notch.

Let’s start off with the official promotional video. Uploaded by LG on Wednesday, this video has Korean boy band BTS talking about the upcoming LG G7 ThinQ. The seven-member clique essentially talks about the LG G7 ThinQ that is somehow part of a collaboration between LG and BTS. They go on to say that the upcoming flagship has 7 amazing features, although there seems to be no detail around that as per YouTube translation. The teaser video ends with talking about certain updates that will follow. There’s yet another teaser from LG. With the words, “Let the countdown begin” and May 2 date, the South Korean phone maker is anticipating its biggest launch of the year.

Moving to one new press render that has been outed by famed smartphone tipster, Evan Blass. While he has shown us high-quality glimpses at the smartphone earlier, the new one flaunts the LG G7 ThinQ’s Black colour variant. There’s nothing quite different in terms of design; there’s a notch, a vertical dual rear camera setup, and G7 ThinQ branding. Yes, there’s also the additional physical button – possibly for triggering an AI-powered assistant (Google Assistant?).

Finally, a spy shot, shared on SlashLeaks, has given us the first look at the functionality of the “Second Screen” and the ability to hide the notch by adding a virtual bezel. As per the leak, users will be able to switch between rounded or edgier corners around the notch. Add to that, colour options are available in Settings that will also be applied to the Home screen and other inbuilt default apps. G7 ThinQ all about that notch customisation.

As for previous confirmations, the LG G7 ThinQ is said to pack in some serious AI software and a “super bright” 6.1-inch LCD display with a brightness of 1,000 Nits. It is also rumoured to sport the latest Qualcomm Snapdragon 845 SoC.