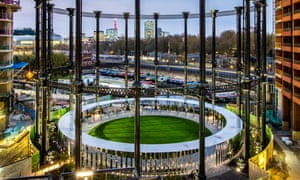 Beefeaters’ red uniforms, Ford motor engines, Truman’s beer, Brompton bikes – they all share the proud hallmark of being made in London. But for how much longer?

The capital is cannibalising its industry, eating its productive space from the inside out, as the manufacturers and makers are moved to give way for the incessant march of housing. In attempting to solve one crisis, we are walking blindfold into another.

Land for industrial use – from manufacturing to storage and distribution – is graded as “Class B” in the UK planning system, separate to housing, retail and public institutions. The rate at which London loses its industrial land is supposed to be a carefully managed process, with strategic slivers relinquished after due consideration of supply and demand, based on calculated projections.

Yet over the last seven years, the city has lost space for industry at almost three times the planned rate set out in the London Plan, with more than 600 hectares converted into other uses. In west London alone, land that was supposed to be gradually released over the next 20 years has vanished in just four.

From Tottenham to the Old Kent Road, Charlton Riverside to Hackney Wick, the city’s centres of production and logistics are being trampled by identikit apartment blocks, with the printers, car menders, parcel depots and scaffolders forced ever further out. An economy that provides nearly one in 10 of London’s jobs is being smothered.

“It’s getting to a crisis point where we are losing space for the things that are required to keep the city functioning at a very basic level,” says Dr Jessica Ferm, lecturer at UCL’s Bartlett School of Planning. “And it is being driven by real estate speculation, rather than deindustrialisation. We may be heading towards a situation where London becomes a densely packed, high value residential dormitory, instead of a vibrant global city.”

Land with planning permission for housing can be worth up to four times more than when used for industry, so many landowners are understandably keen to turn their scrap steel recyclers into gilded flats, a process that has been made much easier by the extension of “permitted development” rights, allowing change of use without planning permission.

At the same time, the safeguards for preserving strategic industrial locations – the highest level of protection designated by the Greater London Authority – have all but collapsed. Their release is now negotiated at borough level, where the pressure to meet local housing targets usually prevails over the desire to retain a food-packing shed.

“We are seeing an accelerated suburbanisation of London’s economy,” says Mark Brearley, professor of urbanism at London Metropolitan University’s Cass Cities department, who also owns an aluminium tray factory off the Old Kent Road, in an area with 800 businesses employing 10,000 people, the majority now threatened by residential development.

“The industries here could happily double in size, if they had the right space,” he adds. “We need all developments to incorporate suitable space for the area’s growing economy, especially for the industrial, workshop and studio activity.”

He thinks the GLA’s projection that there will be an 88% loss of manufacturing jobs by 2050 is “entirely absurd”. “We are seeing growth, not decline. I would guess at no less than a 25% increase over that period,” he says, “as long as inept planning does not allow industry to be strangled by lack of appropriate accommodation in the right places.”

The other side of town, at Camley Street near Kings Cross, one group of businesses and local residents is taking the future of their industrial estate into their own hands. Currently home to 30 businesses employing 500 people, from meat distributors and fishmongers to a laundry and model makers, the group has set out plans to double the amount of employment space, as well as build 750 homes. Set up as a community land trust, both the workspace and housing would remain affordable to local people in perpetuity.

It’s the kind of diverse mix of uses, cleverly combined together on the same site, that has proved difficult to achieve through the usual model of speculative development.

“As soon as local authorities change the designation of an industrial site to mixed use, they’re changing the potential land value,” says Ferm. “So of course they open the doors to speculative developers looking to maximise that value. You get standard housing schemes with a token ground floor unit as notional ‘workspace’ – which is often then converted into another flat. Land value can only be controlled through the separation of uses.” The current system is too crude to retain and nurture medley.

And often, when developers do attempt the holy grail of mixing industry with housing, the workspace ends up being too expensive to attract the tenants who need it. Many such employers choose to locate on industrial estates because they are cheap, not because what they are doing is noisy or dirty.

Still, with a stronger and subtler planning system, and a wised-up mayor that was willing to acknowledge the crucial role of London’s industrial economy with its great potential for growth, it would be possible to reverse the tide.

“The mayors of London have been far too relaxed about the strip-out of non-residential accommodation throughout the capital,” Brearley says. “On this matter they are foolish, and I suspect that, when we all wake-up to the problem that is fast approaching, this foolishness will be decried.”