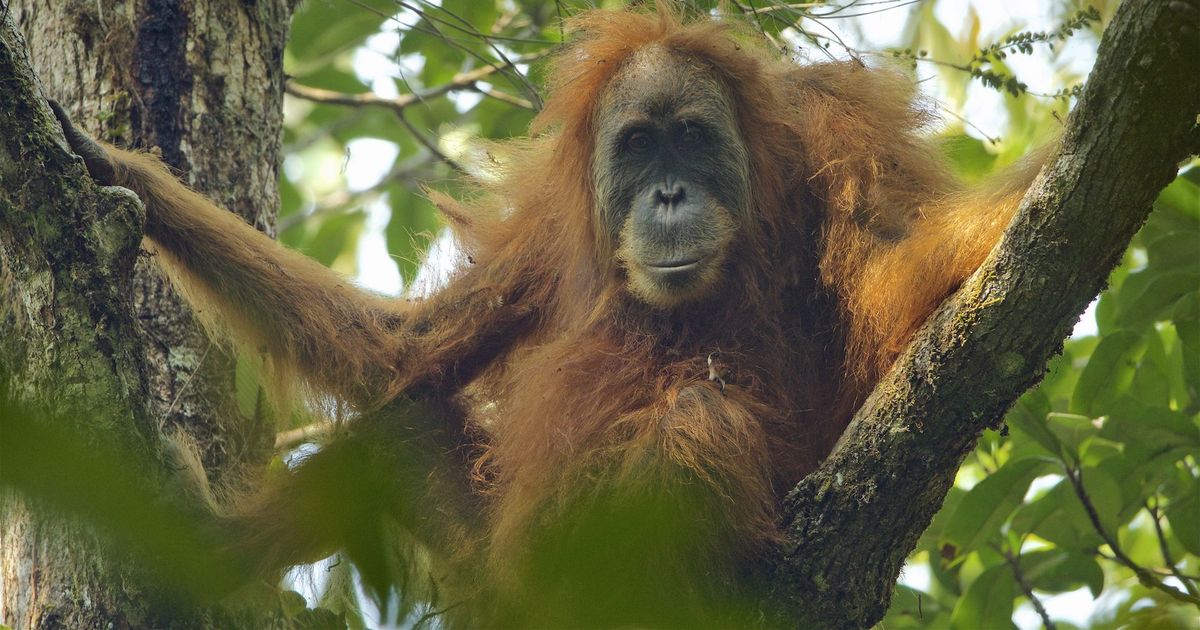 The Tapanuli orangutan (Pongo tapanuliensis) of Sumatra is both the world’s newest known great ape species and its most threatened, after being officially categorised this week as Critically Endangered, or nearly extinct in the wild.

Researchers last month declared it the world’s eighth great ape species, distinguishing it from the Sumatran orangutan (Pongo abelii) and the Bornean orangutan (Pongo pygmaeus), both of which are also deemed Critically Endangered by the International Union for Conservation of Nature. The report concluded there were about 800 Tapanuli orangutans left in the wild, making it the rarest great ape on Earth.

“Due to high levels of habitat conversion and fragmentation, and illegal killing, Pongo tapanuliensis is estimated to have experienced a significant population reduction in recent decades,” the IUCN said, noting that the species had lost 83% of its population over the course of three generations.

While the mountainous topography of the area makes it unsuitable for farming, large swaths of the orangutans’ habitat are at threat from other forms of exploitation. The biggest threat comes from the development of a510-megawatt hydroelectric plant in an area with the highest known density of Tapanuli orangutans. The researchers who described the orangutan suggested the project could harm 8% of the ape’s habitat if completed. “To ensure the long-term survival of Pongo tapanuliensis, conservation measures need to be implemented swiftly,” the IUCN said.

The Indonesian Ministry of Environment and Forestry has acknowledgedthe issues and vowed an assessment of the potential impact from the power plant project on the orangutan habitat. A top official said the ministry would also be more judicious about approving future development projects in the region.

The classification of the Tapanuli orangutan, its first by the IUCN, was issued Tuesday as part of an update of the IUCN’s Red List, which saw an additional 1,514 animal and plant species join the threatened categories of Vulnerable, Endangered or Critically Endangered.

The update, published in Tokyo, assessed the status of 91,523 species, and found 866 to be extinct.

“The extinctions of three reptiles on Christmas Island are an intriguing ‘whodunit,’ as their cause remains unclear,” said John Zichy-Woinarski, professor of conservation biology at Charles Darwin University in Australia and an IUCN commission member. “These extinctions remind us how crucial it is to identify the primary causes of species decline, to inform robust monitoring and conservation programs for threatened and declining species. In this case, the extent and severity of decline was revealed too late to save these Christmas Island reptiles,” he said.

Australia’s increasingly dry and hot climate has also led to a decline in the population of the western ringtail possum (Pseudocheirus occidentalis) by more than 80% over the past 10 years, pushing it two categories up from Vulnerable to Critically Endangered.

In Japan, a third of 46 endemic reptiles are under threat of extinction, primarily due to habitat loss, predators and collection for the pet trade.

The status of the Irrawaddy dolphin (Orcaella brevirostris) and finless porpoise (Neophocaena asiaeorientalis) have also worsened, both moving from Vulnerable to Endangered after a significant decline in their numbers due to fisheries bycatch and habitat loss.

“The Irrawaddy dolphin is revered by many communities and dolphin tourism is an important feature of local economies in parts of India and Cambodia,” says Randall Reeves, chair of the IUCN SSC Cetacean Specialist Group. “While the protected status of both species means that deliberate hunting or capture is rare or non-existent, protection from entanglement and other threats is either lacking entirely or largely ineffective. Without practical solutions to this problem, the declines of dolphins and porpoises are bound to continue for the foreseeable future.”

The IUCN also reported that 26 species of wild wheat, 25 species of wild rice and 44 species of wild yam – hardy variants of some of the most important food crops grown today – have been pushed to the brink of extinction by intensive farming, deforestation and urban sprawl. “Wild crop species, for example, maintain genetic diversity of agricultural crops that can adapt to a changing climate and ensure food and nutritional security,” said IUCN director general Inger Andersen.

The update wasn’t all doom and gloom, though. There was good news for the kiwi in New Zealand, where conservation efforts have led to a steady increase in the population of both the Okarito kiwi (Apteryx rowi) and the northern brown kiwi (Apteryx mantelli). Both have seen their status improve from Endangered to Vulnerable.