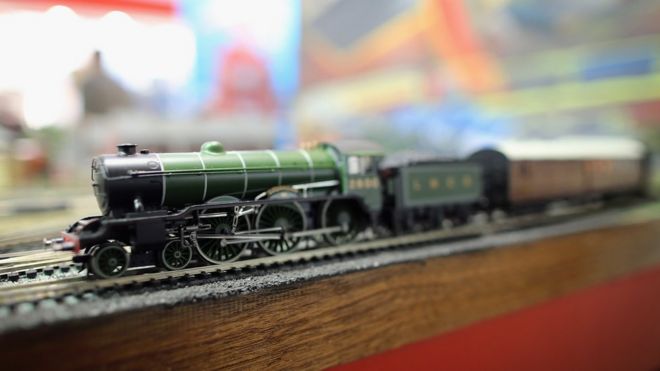 The pound’s recent devaluation after June’s Brexit vote has already led to some price rises, and model railways are one business feeling the effects.

Early in October, the leading manufacturer Hornby told retailers that wholesale prices for many of its trains would rise by an average of 10%.

The company has been making its models in China for more than 20 years.

“We have put prices up, but it’s the first time in two and a half years,” said a Hornby spokesman.

Thanks to manufacturing abroad, the firm’s international trading is denominated in US dollars, so sterling’s 17% devaluation against the US currency since 23 June means that UK prices must inevitably rise.

“It reflects higher input costs as we source in US dollars,” the spokesman explained.

“But it’s part of a package of changes to our trading terms with independent retailers, which will help them in other respects,” he added.

Similarly, the small Welsh model train manufacturer Dapol has warned that the fall in the pound has affected the company “severely” and that the costs of all its imported products have risen between 10% and 20% since 23 June.

“We were hoping that the situation would stabilise and that the pound would regain some of its fallen value,” said Dapol managing director Joel Bright.

“It is now clear that this is not going to be the case and perhaps a weaker pound is here for the longer term. As a consequence, we now need to recoup these increased costs from imported goods.”

Another big model train manufacturer is Bachmann, now owned by a Chinese firm which makes the models in that country, and though it has not revealed its hand it will find it hard to resist the effect of the pound’s devaluation.

Model trains are far more detailed and sophisticated than was once the case.

If you want your model engine to come with digital control and authentic sound effects, you can easily pay more than £300 per loco.

The hobby is especially popular in Germany, whose model firms generally export to the UK via wholesalers such as Golden Valley Hobbies in Herefordshire.

There, Fiona Mulhall says she has little control over the higher prices already being charged by manufacturers such as Busch and Kibri.

“You either put prices up or cut your margin – we have done a combination of both,” she says.

“Customers are understanding [and] seem to be swallowing it for the moment”.

Some smaller retailers are less confident.

He points out that many customers have not yet noticed what is happening.

That is because the higher prices will only filter through next year, once newer and more expensive stock replaces older items still on the shelves.

“Model trains are not an essential item and people buy wisely and vote with their feet,” he warns.

“If we sell at a model exhibition people already pick up items, say they are too expensive and put them down; we might take £500 in a day instead of £1,000 before.

“A wagon set for £80 may now sell for £105 which will be just too expensive, so I think people won’t buy so much if prices go up further” he adds.

The days when every high street had a model shop are long gone, and much of the trade’s sales now take place via post and the internet.

One of the biggest mail order retailers, known dismissively in some quarters as “box shifters”, is Rails of Sheffield.

There, John Barber says the weakness of the pound means that sales to customers abroad are buoyant.

“The fall in the pound has been enough to tip the balance for foreign buyers, the UK for them looks very attractive, and they don’t have to pay VAT either if they are from outside the EU” he says.

“We are doing a lot of overseas sales to America, Australia, Germany, Austria and Switzerland”.

For better or worse, the rise in model train prices will not have any direct effect on the UK’s general rate of inflation.

Toy trains are not included in the shopping basket of 800 goods and serviceswhich are sampled every month by the Office for National Statistics (ONS) to construct the consumer prices index.