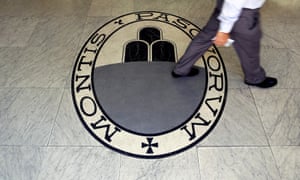 A rescue deal for the world’s oldest bank – Banca Monte dei Paschi di Siena – hung in the balance on Monday after Italian voters rejected constitutional changes and plunged the government into crisis.

Shares in MPS, which was founded in 1472 , fell amid fears the resignation of Prime Minister Matteo Renzi will affect its attempts to clinch a €5bn (£4.2bn) lifeline from investors.

The shares plunged 10% initially before ending the day 4% lower while shares in other major Italian lenders were also lower amid speculation that the Italian government might have to prop up MPS.

As the news emerged of Renzi’s defeat in a referendum on constitutional reform, there was a sharp drop in the euro and a rise in the cost of borrowing for Italian government. But after the initial reaction the euro recovered to touch its highest level against the dollar since November and Italian bond yields were also little changed.

“Italy is a large economy, one of the largest in Europe, it has strong institutions. You can see that market reaction so far has been moderate,” said Dijsselbloem.

The market’s focus was largely on MPS, which is also Italy’s third largest bank, where concerns were raised during the stress tests on the sector by the European Banking Authority in July. The bank was ranked as the weakest of the 51 European institutions subjected to the annual assessment.

A consortium led by the Wall Street bank JP Morgan was meeting to discuss the fundraising but unlikely to make any formal decision for a few days to test the political backdrop after Renzi’s resignation.

There were also reports that MSP bank officials are meeting representatives from the Qatar Investment Authority – the gulf state’s sovereign wealth fund – to try to secure backing.

Even so, there are expectations that the Italian government will need to step in, despite new EU rules which prevent state aid unless bondholders have been forced to take losses.

Alberto Chiandetti, a manager at the Fidelity European Opportunities and Fidelity Funds Italy investment funds, said: “The focus is on whether an anchor investor will materialise or not. If not, Monte Paschi needs a plan B and in that scenario, bank shares are likely to suffer most. We should know [on Monday] whether such an anchor investor exists for Monte Paschi.”

The prospects of a capital injection for MPS being found entirely from private investors appeared to be receding, analysts said. “I think a precautionary recapitalisation is ultimately still probable as a private sector-only solution is now highly unlikely to work,” said Mujtaba Rahman, managing director of consultancy Eurasia Group.

Renzi has been credited with helping to create a backstop fund – known as Atlante– for a banking industry that has €360bn of bad debts and is highly fragmented with more than 500 lenders.

Technically, the state can intervene only once bondholders – which in the case of Italy would include savers – have taken losses. However, in uncertain circumstances the government can step in. There are also suggestions that a compensation scheme could be set up for retail bondholders forced to take losses.

Markets are also looking to next week when Italy’s largest bank, UniCredit, is scheduled to meet investors in London to discuss its strategy. The meeting on 13 December has prompted speculation it is readying a multibillion-euro cash call. UniCredit was ranked fifth weakest in the European bank stress tests.

Chiandetti said: “Currently rumoured to be around €10bn to €13bn, the amount should be disclosed at the UniCredit capital market day. A difficult environment for Italian banks will no doubt weigh on this upcoming deal and put pressure on UniCredit shares.”