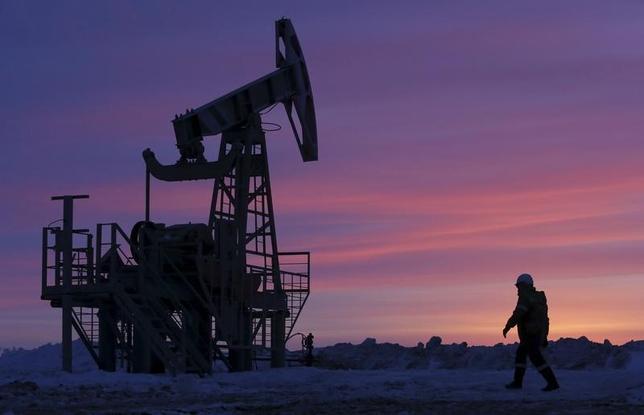 A worker walks past a pump jack on an oil field owned by Bashneft company near the village of Nikolo-Berezovka, northwest from Ufa, Bashkortostan, Russia

Oil prices fell 4 percent on Tuesday after Saudi Oil Minister Ali Al-Naimi ruled out any production cuts, restating the kingdom’s rationale for maintaining output was that demand would pick up excess crude that has crushed prices over the past 20 months.

Big oil exporters Saudi Arabia and Russia have proposed to freeze output at January levels, which were near record highs, only if other producers also do the same.

More meetings on the potential freezes will be held in March, al-Naimi told the IHS CERAweek conference in Houston, adding that he expects most of the countries that count to freeze crude production levels.

Analysts remain skeptical that the cuts will be effective in rebalancing the market.

“If they freeze production at January levels when you’re already over supplied by around a million barrels per day it just prolongs that situation of oversupply,” said Energy Aspects’ analyst Dominic Haywood.

Also, Iran, now free of western sanctions that hurt its crude trade, is seen unlikely to agree to an output cap. According to a report from Iran’s student news agency ISNA, the country’s oil minister said the production freeze is “laughable,” because it does not allow Iran to regain its production share.

OPEC Secretary-General Abdullah al-Badri said on Monday that if successful, a freeze could trigger other action but the days when the producer group was responsible for cutting output alone are over.

He told the CERAWeek conference the tentative pact to freeze output reached last week between Saudi Arabia, Russia, Venezuela and Qatar was just a start.

An estimated 1 million to 2 million barrels of oil are being produced daily in excess of demand.

Investment bank Jefferies expects OPEC output to hit 32.6 million barrels per day (bpd) in the second quarter, including higher Iranian output, with markets starting to rebalance by the third quarter as production outside OPEC falls by 800,000 bpd this year.

Oil prices jumped more than 5 percent on Monday on projections by the International Energy Agency (IEA) that U.S. shale oil production could fall by 600,000 bpd this year and another 200,000 bpd in 2017.