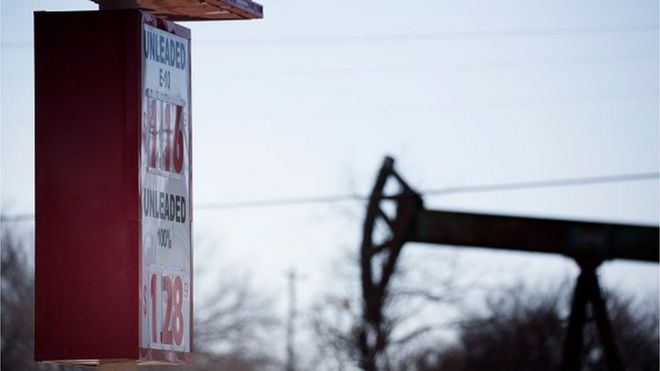 There is evidence that oil prices are stabilising and could even begin to rise again, the International Energy Agency (IEA) has said.

It said lower oil output in the US and other countries was helping to curb the glut in the supply of oil.

The increase in supply from Iran has also been less dramatic than first feared, the IEA said.

Oil prices have plummeted 70% since August 2014, falling as low as $27 per barrel earlier this year.

The IEA, which coordinates energy policies of industrialised nations, said it now believed non-Opec output would fall by 750,000 barrels per day (bpd) in 2016, compared with its previous estimate of 600,000 bpd.

US production is forecast to decline by 530,000 bpd this year, it said.

“There are clear signs that market forces… are working their magic and higher-cost producers are cutting output,” the IEA said.

There has been an oversupply of oil from booming US output in recent years, thanks to the spread of fracking.

Meanwhile, members of the oil-producing cartel Opec have been reluctant to cut supply in order to “put a floor” under the the oil price, for fear of losing market share against higher-cost producers.

These two factors sent oil prices tumbling at the end of 2014 and throughout 2015.

Lower demand for oil from China, the world’s second-largest consumer of commodities, has also hurt oil prices and prompted fears of a global economic slowdown.

Many of the major oil firms have reported dramatic falls in profits and cut back billions of pounds in investments in exploration, while at least 5,000 jobs have been lost in the North Sea oil industry over the last 18 months.

Prices hit a 12-year low in January, but have since recovered to about $40 per barrel after leading Opec nation Saudi Arabia and top non-Opec producer Russia said they could freeze output.

The IEA said Opec output fell by 90,000 bpd in February because of production outages in Nigeria, Iraq and the United Arab Emirates, which lost a combined 350,000 bpd.

“Meanwhile, Iran’s return to the market has been less dramatic than the Iranians said it would be; in February we believe that production increased by 220,000 bpd and provisionally, it appears that Iran’s return will be gradual,” the IEA said.

Iran has promised to add as much as one million bpd to global supply after securing a deal with the West in January that has seen the easing of international sanctions, imposed on the Islamic Republic over its nuclear programme.

The IEA said inventories in industrialised member countries of the Organisation for Economic Co-operation and Development (OECD) had declined in February for the first time in a year, although crude in floating storage increased.

“For prices, there may be light at the end of what has been a long, dark tunnel, but we cannot be precisely sure when in 2017 the oil market will achieve the much-desired balance. It is clear that the current direction of travel is the correct one, although with a long way to go,” the IEA added.

While demand for oil reached a near five-year high in the middle of 2015, prompted by lower prices and countries such as China and India building up stockpiles, it has slowed significantly since the start of the year.

And the IEA warned: “The risks to global oil demand growth are almost certainly on the downside.”

It said it expected demand to be flat in the US, the world’s largest consumer of oil, this year.

And it said demand could weaken “if prices maintain their recent upward momentum”.

“We expect India and other smaller non-OECD Asian economies and the Middle East to provide most of the 2016 growth. The foundations for global demand growth are sound, but not rock-solid,” the IEA said.