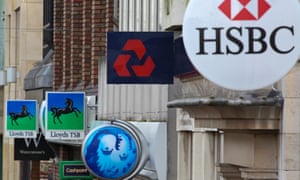 Further charges for the payment protection insurance mis-selling scandal and details of the impact of Brexit will be in the sights of investors when the high street banks report their third-quarter results this week.

The financial services industry has already incurred £37bn of costs associated with PPI and is now expected to face an even bigger bill after the Financial Conduct Authority set June 2019 – rather than spring 2018– as a deadline for claims.

When Barclays and the bailed-out Lloyds Banking Group and Royal Bank of Scotland report their results for the three months to the end of September they may have to set aside hundreds of millions of pounds more to handle claims.

Analysts are also braced for admissions that the Brexit vote and the cut to interest rates could dent future profits. “We think the focus will be updates to guidance for core UK earnings post the EU referendum, but we expect to need to wait until [full year] results for substantive new guidance or rebooted strategic plans,” said analysts at Morgan Stanley.