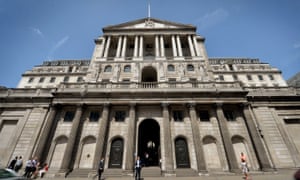 Royal Bank of Scotland was the biggest failure in the Bank of England’s annual health check of the UK banking system and has embarked on a new plan to bolster its financial strength by £2bn.

The Edinburgh-based bank, which is 73% owned by taxpayers, is to cut costs and reduce its exposure to risky assets after the results of the toughest tests yet on the banking system were published on Wednesday.

Two other banks, Barclays and Standard Chartered, also struggled in the so-called stress tests, which are based on hypothetical scenarios including house prices falling and the global economy contracting by 1.9%. Barclays already has a plan in place to bolster its financial position, while Standard Chartered said it has not needed to take any action.

Oil producers have agreed to cut production by 1.2m barrels a day, to 32.5m, in an attempt to ‘stabilise the market’ and push crude prices higher.
Read more

As the Bank announced the results of its third annual stress tests it warned of a “challenging period of uncertainty around the domestic and global economic outlook”.

Its financial stability report, a half-yearly update on risks to the financial system, listed domestic risks which include the uncertainty created by the Brexit vote, the commercial property sector, high level of debts in UK households and the potential vulnerability of the economy to a reduction in foreign investors buying UK debt.

Mark Carney, the Bank governor, said Threadneedle Street was keeping an eye on debt. Households are “drawing down their savings and borrowing for the first time since the crisis”, he said. Lending to households increased by 4.1% in the year to September, close to the fastest rate since the 2008 crisis.

Global risks were described as “elevated”, with the Bank also warning that there could be an impact on global trade from Donald Trump’s election as US president. Chinese debt is high and the Bank also highlighted risks in some countries using the euro, including those caused by a referendum in Italy on Sunday.

The Bank also provided its promised update on the health of the residential mortgage market and is keeping in place measures announced in 2014 to restrict lenders’ ability to help customers needing to borrow four and half times their income.

Carney said these measures were remaining because of household indebtedness. “This will help ensure that underwriting standards don’t slip from responsible to reckless as they have during past periods of consumption-led growth,” said Carney.

Three other banks, Lloyds Banking Group, HSBC and the UK arm of Santander, as well as Nationwide, were subjected to the tests which were introduced after the 2008 crisis.

The Bank found that in aggregate, the entire banking system was strong enough to withstand the test, which is based on a five-year scenario in which £44bn of capital is wiped out in the first two years – five times the losses incurred during the depths of the financial crisis. Another test will run next year. Some of the banks tested this year would have used their bonds to help bolster their financial position.

Under this scenario, another £48bn of costs are incurred to pay fines and legal costs – more than the £40bn hit the banks took between 2011 and 2015. The risk of further penalties was one of the reasons RBS failed to meet the hurdle set by the Bank as it awaits a penalty from the US for mortgage bond mis-selling before the crisis. RBS shares initially fell 4% but ended the day 1.3% lower while shares in the other banks tested were higher.

Ewen Stevenson, RBS finance director, said: “We have taken further important steps in 2016 to enhance our capital strength, but we recognise that we have more to do to restore the bank’s stress resilience, including resolving outstanding legacy issues.”

Deeper cuts to costs are expected when RBS reports its results next year which could entail job cuts. Analysts at UBS said: “We expect a bigger cost and restructuring plan [from RBS] in February.”

Laith Khalaf, senior analyst at Hargreaves Lansdown, pointed out “RBS is in no immediate danger” although he said the bank was the “weak link in the UK banking chain”.

Barclays said it had passed the Bank’s test. Standard Chartered said it “has a strong and liquid balance sheet and the results of the stress test demonstrate its resilience to a severe global stress scenario”.