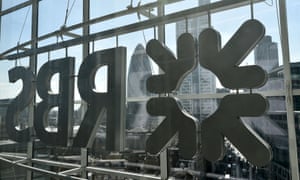 A consortium made up of private-equity firms and the Church of England has received at least £180m from Royal Bank of Scotland for backing the bailed-out bank’s aborted attempt to float off 300 branches on the stock market.

The Edinburgh-based bank, 73% owned by the taxpayer, has already admitted that the ill-fated attempt to carve out the 300 branches under the Williams & Glyn (W&G) brand has cost £1.5bn.

Documents filed at Companies House shed light on the sums paid by RBS to the consortium – which, as well as the Church of England, included Corsair Capital and Centerbridge – formed three years ago to participate in the flotation of W&G. In a complex deal, they put £600m into RBS through a bond, which was intended to be exchanged for shares when the new bank floated on the stock exchange.

RBS may reveal further costs associated with the troubled branch spinout when it publishes its third-quarter results on Friday, at the end of a week in which rival bailed-out bank Lloyds Banking Group also reports, along with Barclays.

The sale of the 300 branches was forced upon RBS by the EU as a penalty for its £45bn taxpayer bailout in 2008. It has run into repeated problems and must now be completed by the end of next year. Ross McEwan, the RBS chief executive,warned last month that RBS faces unchartered territory if he cannot find a solution.

An attempt to sell the branches to Santander collapsed in 2012 and the deal with the consortium clinched the following year. But any attempt at stock market flotation was abandoned in August and the bank is now looking for a buyer.

The consortium was to have ended up with a stake of between 30% and 49% when W&G floated and the £600m bond converted into shares. The consortium used £330m of its own money to pay for the bonds and borrowed £270m off RBS.

Documents at Companies House for Lunar Investors – a limited-liability partnership set up by members of the consortium – show that in the period 26 September 2013 to end-December 2015 RBS paid £184m in interest to the holders of the bond. The consortium was charged £18m in interest for its £270m loan.

RBS said at the time the transaction was announced in September 2013 that it would pay the consortium a rate of interest between 8% and 14% a year. The documents at Companies House indicate that RBS was paying the higher rate of interest to the investors. It paid £100m for the 15-month period to end of December 2014 and £84m for the 2015 calendar year.

RBS would not comment on the payments, nor would Corsair. The Church Commissioners, which manages £7bn of the Church of England’s investments and helps funds dioceses and parishes and helps pay the pensions for clergy, said it had invested in W&G “due to our belief in the importance of competition in the banking sector and the vital role of challenger banks.

“We are pleased to have been able to work with Williams & Glyn on ethics in banking and are grateful to the management team for their enthusiasm on this issue,” the Church Commissioners said. It is reported to have a 10% stake in the consortium.

There had been hopes that W&G would be a new high-street competitor to the big four – RBS, Lloyds, Barclays and HSBC – along with TSB, which was spun out of Lloyds under instructions from the EU because of its taxpayer bailout. TSB is nowowned by Sabadell of Spain.