Standard Chartered could claw back bonuses from up to 150 senior staff after slumping to its first annual loss since 1989, as hefty restructuring costs and weak commodity prices took their toll on the emerging markets-focused lender.

The bank fell to a headline pretax loss of $1.5 billion after accounting for costs from redundancies and impairments on bad loans. Underlying profit plunged 84 percent to $800 million, missing analysts’ average estimate of $899 million, according to Thomson Reuters data.

Chief Executive Bill Winters said the bank had launched a number of accountability reviews which could lead to it taking back payments made to some senior executives if they are found at fault for the lender’s soaring bad loans book.

Reviews into whether individuals breached compliance or risk-related rules that led to the bank’s underperformance could lead to further clawbacks of bonuses paid out in the past, Winters said.

A spokeswoman for the bank declined to comment on the identities of individuals who may be subject to the clawbacks, but said the reviews covered around 150 staff including both current and former employees.

The surprise annual loss shows the scale of the task facing Winters as he attempts to restore revenue growth and repair a bank’s balance sheet riddled with bad loans made under previous CEO Peter Sands’s expansion-oriented regime.

The bank’s shares fell as much as 12 percent before recovering to be down 2 percent at 1230 GMT.

Former JPMorgan investment banker Winters last November announced plans to axe 15,000 jobs and raised $5.1 billion in capital as part of a plan to restore profitability and shore up the balance sheet.

“The challenging external environment is not an excuse for our performance. We are not unwitting victims,” Winters said.

“The external challenges increase our urgent need to take all necessary steps to address the structural and operational issues we have identified as critical to improving returns”.

The lender plans to introduce a new long-term bonus plan for its 200 or so most senior managers that will pay out in 2018 if they meet targets to improve shareholder returns and other strategic objects.

Bonuses across its workforce for the past year were down an average 22 percent.

Standard Chartered’s problems began to emerge in 2012, when after a decade of rising profits the lender was hit by U.S. regulatory fines and the start of a prolonged downturn in emerging markets and commodity prices on which much of its fortunes depend.

The deteriorating market environment caused the bank’s gross level of non-performing loans to jump from $7.5 billion at the end of 2014 to $12.8 billion by end-2015, as Winters seeks to recognise bad loans early rather than let them linger on the books.

However the bank said it is reducing its risk exposure and over the past year had cut its exposure to commodities by 28 percent, with its commodity-linked lending portfolio now less than $40 billion.

“On the assumption that commodity prices remain at around current levels, we would not expect this portfolio to reduce materially from here,” Chief Financial Officer Andy Halford said.

Analysts at Bernstein Research said the bank would be able to weather the storm and still had a relatively good underlying business model. “Trade is not dead and Standard Chartered still has a top class franchise in emerging markets,” they wrote.

The bank confirmed it would not pay a dividend for 2015, but Chairman John Peace said the board intends a payout for the 2016 financial year.

The bank’s shares had fallen 22 percent this year amid a 20 percent drop in European bank stocks as investors worry about slowing growth and lenders’ loans to the embattled energy sector.

(Additional reporting by Jane Merriman in London and Lisa Jucca in Hong Kong; Editing by Mark Potter and David Holmes) 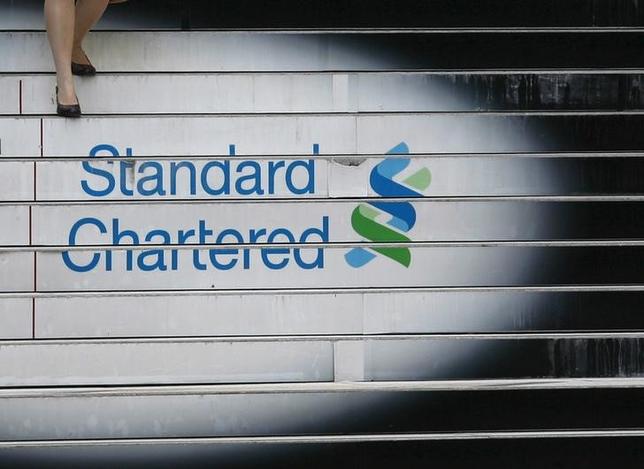 A woman walks down the stairs of the Standard Chartered headquarters in Hong Kong
[Source:- Reauters]