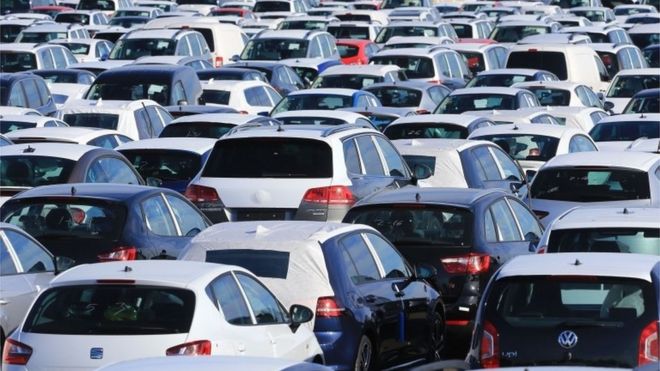 The number of new cars sold in the UK hit an all-time high in 2016.

The Society of Motor Manufacturers and Traders (SMMT), said 2.69 million cars were registered last year, 2% higher than in 2015.

The industry body said 2016’s growth was due to “very strong” consumer confidence, low-interest finance deals and the launch of several new models.

However, the SMMT says this year is unlikely to set another record, with sales expected to fall by 5-6%.

SMMT chief executive Mike Hawes said such a fall would not represent “a collapse in the market” and sales would still be at “historically an incredibly high level”.

He said that five consecutive years of increased sales had been fuelled by pent-up demand that developed during the recession of the late 2000s.

The record level of registrations in 2016 doesn’t tell the whole story. Overall it was fleet buyers that propelled the market to new highs.

After a strong start, private car sales fell throughout most of the year. December’s 5.5% fall year on year was the ninth monthly decline in a row.

With claims that the new car market is saturated, higher prices coming on forecourts and economic uncertainty ahead, the industry’s forecast of a 5% fall in the market this year could prove optimistic.

The SMMT added that the UK new car market was one of the most diverse in the world, with some 44 brands offering nearly 400 different model types.

The biggest selling model was the Ford Fiesta, followed by the Vauxhall Corsa and Ford Focus.

The SMMT said diesel and petrol cars continued to be by far the most popular fuel types for consumers with market share at 47.7% and 49.0% respectively.

However, alternatively fuelled vehicles (AFVs) experienced a strong uplift in demand, rising by 22.2% across the year.

Plug-in hybrids and petrol electric hybrids, in particular, experienced significant growth, with demand up 41.9% and 25.1% respectively.

But according to one car dealer the high sales figures present a distorted picture of the industry’s health.

Peter Smyth, a director of car dealership Swansway, pointed out that the figures counted cars registered as sold to dealers, not private or fleet buyers.

He told the BBC dealers were having cars “forced on them” by the manufacturers and once dealers have bought the cars, they then have to discount them to get them sold.

“The real market is more like 2.2 million. I believe we are at the peak of a car bubble,” he said.

The SMMT’s figures show private car sales actually fell in three of the four quarters of 2016.

Samuel Tombs, UK economist at Pantheon, said: “Looking ahead, the stagnation of households’ real incomes this year, mainly due to a burst of inflation, likely will weigh further on car purchases.”

He added that interest rates on unsecured loans were unlikely to become more competitive in the immediate future and that would remove another one of the incentives to buy a new car.

The SMMT’s Mr Hawes warned car prices were beginning to rise, with the fall in the value of the pound resulting from the Brexit vote having increased prices by 2-3%. More than 85% of new cars bought in the UK are imported.

Mr Hawes said the impact of Brexit on the car industry was, as yet, unclear.

He warned though that if the UK was unable to trade freely with the EU and tariffs were introduced, it would add about £1,500 to the price of each imported car.