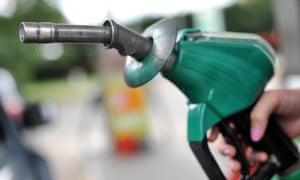 The cost of petrol is close to rising above £1.20 a litre in some parts of the UK after a weekend deal between members of the Opec oil cartel and non-Opec countries.

The AA motorists’ organisation said the deal would add about 3p to the cost of a litre of fuel after the price of Brent crude climbed to more than $57 a barrel in the wake of the agreement.

With UK inflation already expected to jump above 1% in official figures for November out on Tuesday, the latest rise in oil prices will begin to justify forecasts that inflation is heading for between 2.5% and 4% by the end of 2017.

Opec, which accounts for about 40% of world supply and whose members include Saudi Arabia, said the deal with non-Opec members Russia, Mexico and Bahrain would result in a reduction of 558,000 barrels a day from 1 January.

Although less than the targeted 600,000 barrels, it was the largest ever contribution to production cuts by non-Opec members and was the first such agreement between Opec and non-Opec members for 15 years.

The move follows an agreement last month by Opec members to cut production by 1.2m barrels a day, also from the New Year, that followed weeks of wrangling.

In January, Brent crude prices plunged to almost $27 a barrel and the price at the pumps dropped to £1 a litre in some areas. But a recovery in demand for oil, especially from China and Europe, and the prospect of a deal orchestrated by Saudi Arabia to cut production has sent prices heading upwards.

The AA said the average price would rise from £1.15 a litre for unleaded petrol to £1.18, though in London and parts of the south-east, where prices have already hit £1.17, the figure could rise above £1.20.

Adding to the oil price momentum was a comment from Saudi Arabia suggesting it could make bigger cuts than first envisaged. The Saudi oil minister, Khalid al-Falih, said: “I can tell you with absolute certainty that effective 1 January, we’re going to cut and cut substantially to be below the level that we have committed to on 30 November.”

Meanwhile, Iraq’s oil minister Jabar al-Luaibi told Reuters the country was committed to complying with the pact, although it was confident it had the potential to raise output in the future. He said: “The cuts will aim at the figures we agreed with Opec definitely, but [for] the areas of the cuts there are many options on the table.”

But the prospect of US shale producers continuing to raise their own output levels, offsetting cuts by Opec, meant analysts were divided over whether the oil price has further to climb.

Fawad Razaqzada, market analyst at Forex.com, said a Trump-inspired growth spurt in the US and a recovery in China could spur demand for oil at a time when Opec has found a way to restrict supply.

“Make no mistake about it – this historic agreement is a gamechanger. Although the crude oil rally has already started at the end of last month when the Opec first announced the deal, I think there is plenty of fuel left in this rally,” he said.

“Admittedly, after a big gap we may see a retracement of some sort in prices now but ultimately the fundamentals still point to higher levels going forward. The oil market will now be balanced earlier than would have been the case without a deal.

“It is very likely that US shale producers will take advantage of this opportunity to ramp up their crude output once again but this will be a worry for another day.

David Hufton, a strategist at oil brokers PVM Oil Associates, said oil supplies were still expanding despite the deal and warned the price of oil was driven more “by speculative players, moving in herds”.

Gene McGillian, manager of market research at Tradition Energy in Stamford, Connecticut, said the Brent crude price was likely to be capped at $60. “Right now the market is kind of feeding on itself,” he said.

“The market could push [West Texas] another $1 to $2 up to $55, and Brent could go to about $60, but at that point there are some concerns that are going to start to cap the rally.”

Luke Bosdet, oil analyst at the AA, said US shale producers would react by increasing production to benefit from the higher oil price.

“They have become more efficient during the two years of low prices and many firms can now make money at prices below $60 a barrel,” he said.