CURRENCY
July 21, 2018 Loknath Das China, Currency, if, Its, Manipulated, review, to, Treasury, US 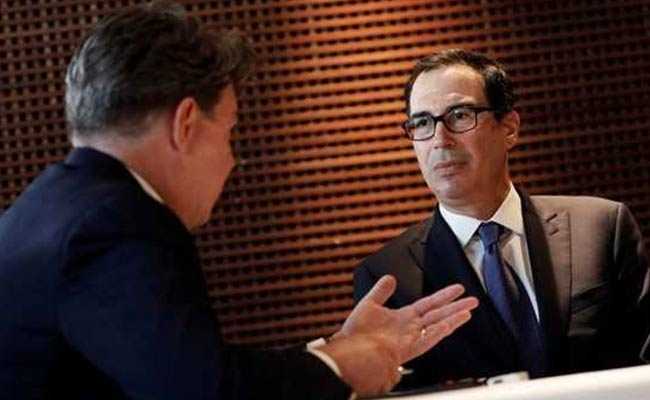 US Treasury Secretary Steven Mnuchin listens to a question during an interview.

SAO PAULO: The United States is monitoring the recent weakness in China’s yuan currency and will review whether the currency has been manipulated, Treasury Secretary Steven Mnuchin told Reuters on Friday.

Mnuchin said in an interview in Sao Paulo, Brazil, that the yuan’s weakness would be reviewed as part of the U.S. Treasury’s semi-annual report on currency manipulation. The report is due on Oct. 15 and will be based on activity for the first six months of 2018.

Asked whether he was concerned that China may be using its currency as a weapon in an escalating trade fight with the United States, Mnuchin said: “I’m not saying whether it’s a weapon or not a weapon. There’s no question that the weakening of the currency creates an unfair advantage for them.

“We’re going to very carefully review whether they have manipulated the currency,” he said.

Mnuchin’s comments raised the specter of designating China as a currency manipulator for the first time since the early days of the Trump administration in 2017. Treasury has refrained from making that designation despite Trump’s campaign promise to do so as soon as he took office, and Trump himself in April 2017 had backed away from that stance and said that China was not a currency manipulator.

Mnuchin said the reason for applying the label on China is partly because the yuan had been rising or stable until earlier this year.

Various U.S. lawmakers, both Democrats and Republicans, and manufacturers in years past had long complained that China deliberately undervalued its currency to give its companies an unfair price advantage in international trade.

Mnuchin said he would be discussing China’s non-market economy policies with Group of Seven allies Britain, Canada, France, Germany, Italy and Japan on the sidelines of the Group of 20 meeting in Buenos Aires this weekend.

Trump, in a tweet, on Friday accused China and the European Union of manipulating their currencies, saying it is “taking away our big competitive edge.”

He also repeated his complaints that the Federal Reserve’s interest rate hikes were causing the dollar to rise, and said he was ready to impose U.S. tariffs on all $500 billion in goods imported from China.

China’s yuan, battered by the trade brawl, has lost 7.5 percent of its value since the end of the first quarter, hitting a year low of 6.767 to the dollar and marking its biggest 90-day drop since yuan exchange rates were unified in 1994.

Mnuchin said the Trump administration was open to a trade deal to end tariffs on Chinese goods, but only if China was sincere in making meaningful changes to its technology transfer and joint venture policies, as he noted that China frequently voices support for a rules-based trading system.

“We want them to play by the rules. And that means no forced technology transfer, no forced joint ventures and giving our companies the opportunity to compete fairly,” Mnuchin said. “These are issues that are completely consistent across the G7. These issues are shared jointly.”

Mnuchin said he would be discussing China’s non-market economy policies with Group of Seven allies Britain, Canada, France, Germany, Italy and Japan on the sidelines of the Group of 20 meeting in Buenos Aires this weekend.

Mnuchin also confirmed that the U.S. Congress had reached a deal for final language to modernize and strengthen security reviews of foreign acquisitions of U.S. companies and joint ventures with U.S. companies.

Mnuchin said he was pleased with the final product, but declined to discuss details, saying only that it would not target specific countries.

Mnuchin had persuaded Trump last month to use the legislation to better protect sensitive U.S. technology from Chinese acquisition, rather than ordering China-specific investment restrictions.

“It was our desire to have the proper tools to protect technology wherever it may be needed,” he said.

Mnuchin also said the Treasury was open to the possibility of lifting sanctions on Russian aluminum giant Rusal if the right solution can be reached. He said it was not the Trump administration’s objective to put the company out of business over its ties to sanctioned Russian tycoon Oleg Deripaska.