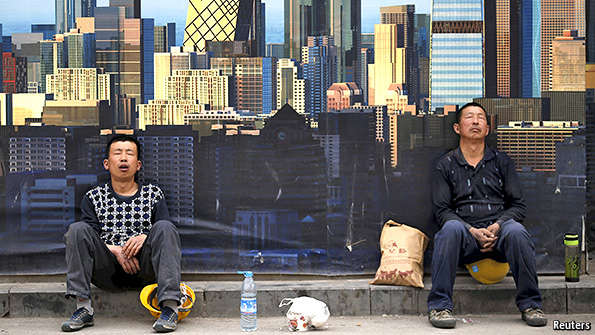 TODAY’S economic data releases from China were a mixed bag. First, the bad news. It has been nearly half a year since China started easing its monetary policy, and there is still little sign of a rebound in growth. For anyone thinking that the economy would surge back to full throttle, the sluggish response to the stimulus is disappointing. There was, though, also a glimmer of good news. The downturn appears to be abating. Even the beleaguered property market appears to be finding its feet. This should assuage fears that the slowdown might spiral out of control and turn into a rout.

The most worrying figure in today’s data releases was fixed-asset investment, which has long been a barometer for Chinese growth. Growth of this key indicator slowed sharply to 12% year-on-year, down from 13.5% in March. That largely stemmed from a sudden slowdown in property investment, growth in which slowed to 6% year-on-year, less than half the average pace of 14% in 2014. The government cushioned the shortfall to a certain extent with infrastructure investment. Spending on roads, railways and sewage systems, to name a few targets, increased 20.3%, about the same amount as last year. Some had forecast earlier this year that the downturn might lead to a fiscal collapse, but the flow of funds into infrastructure shows that China is still finding ways to support the economy.

That steadying hand led to a small uptick for the manufacturing sector. Industrial output rose 5.9% year-on-year in April, up from 5.6% in March. Although still very soft by the standards of China’s recent past, it does point to a stabilisation. There were also indications of that in the property market—no trivial matter given that it powers as much as a fifth of the economy. Housing sales rose 7% year-on-year in April, the first increase since 2013. With unsold housing inventories still high and property developers weighed down by debt, building activity is unlikely to stage a strong rebound. But the worst-case scenario of a housing crash, which was always implausible, now looks even less likely.

One question that emerges from this snapshot of the economy is whether the central bank’s shift to a looser monetary policy has had much, if any, effect. China has cut its benchmark interest rates three times since November, and has twice lowered banks’ reserve requirements, freeing up more cash for them to lend. That might appear to be quite a dramatic loosening, but the impact in China was bound to be more muted because of the nature of the country’s monetary system. Over the past decade the central bank relied on foreign-cash inflows to generate monetary growth. In recent months, with cash flowing out as investors move their money abroad, the easing of required-reserve ratios has been aimed first and foremost at avoiding a sudden tightening of liquidity. Similarly, with inflation so low, rate cuts have been needed simply to keep real funding costs from rising.

Now, it looks to be only a matter of time before the central bank eases again. Even with all the interest-rate cuts and cash injections, the broad M2 gauge of money supply slowed to 10.1% year-on-year growth in April, the weakest figure on record. New bank lending was also lower than most analysts had expected. The one part of the financial system to respond forcefully to the policy loosening so far has been the stockmarket, which has been on a frenzied run since late last year. The rally is troubling given how divorced it is from economic fundamentals, but then Chinese equities have long inhabited their own universe, paying little heed to growth. In the real world, the outlook for the Chinese economy is more subdued. Continued easing should bring about a stabilisation, but not a powerful rebound.