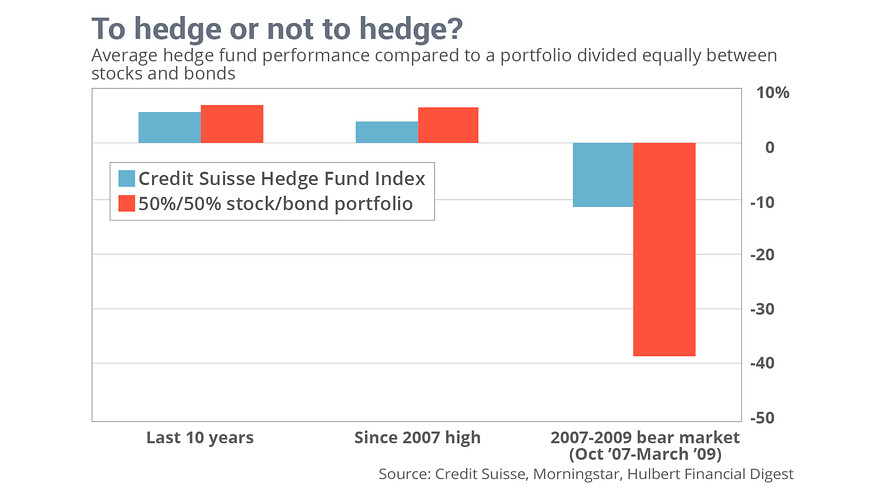 It’s a bad sign for the stock market that many investors are souring on the hedge fund industry.

That’s because hedge funds are in the business of — I know you’ll be surprised by this — hedging. In essence, the average hedge fund offers investors a trade-off: In return for outperformance during bear markets, it lags behind when the overall market is rising.

During the 2007-2009 bear market, for example, the average hedge fund greatly outperformed the benchmark S&P 500 SPX, -0.08% In the six-year-plus bull market since, it has trailed in every calendar year.

But there inevitably comes a point during lengthy bull markets when investors stop worrying about bear markets and greed takes over. They start criticizing hedge funds for not beating stock market averages, forgetting that this is not what they are designed to do during a period of rising stocks.

Such shortsightedness and amnesia usually mean a major top in the market is not far off. As contrarian analysts like to remind us, bull-market tops are imminent when the last bear throws in the towel. Since hedge fund investors generally are among the most sophisticated on Wall Street and among those least likely to be swayed by the latest fads and headlines, it’s particularly ominous when even theybegin to lose their sense of fear and get greedy.

Yet that’s precisely what many have been doing. According to data released Friday from TrimTabs and BarclayHedge, hedge fund redemptions totaled $34.6 billion over the six months through the end of March. That’s the largest consecutive quarterly outflow since June 2009, according to Sol Waksman, president and founder of BarclayHedge. Partly as a result of such redemptions, according to a report in the New York Times, several high-profile hedge funds have decided to close their doors.

Let me hasten to add that I have no desire to defend the hedge fund industry. As I have argued before, econometric studies have found that most hedge funds do not make enough money to earn their hefty fees, much less add value. As you can see from the chart above, even a conservative portfolio divided equally between a stock and bond market index fund would have outperformed the average hedge fund over the past decade.

But my argument here is based on investor perception, not the academic conclusions reached by complex econometric studies. And investors appear to be irrationally souring on hedge funds because they have lagged behind the S&P 500 during the recent bull market.

It is this irrationality that has gotten contrarians’ attention — and which is suggesting that a major top may be closer than we previously thought.