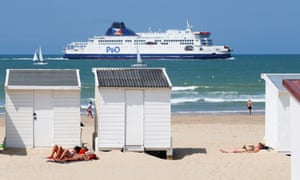 The scale of no-deal panic gripping major companies has been thrown into sharp focus by a series of damage-limitation announcements, as corporate Britain signalled it is running out of patience with Westminster gridlock.

Sir James Dyson, the Brexit-backing billionaire, dealt a further blow to the government by revealing he is shifting his company headquarters to Singapore in a move that drew sharp criticism.

Dyson’s decision to move his HQ out of the UK came on a day in which a series of high-profile names revealed measures to mitigate the impact of a disorderly departure from the EU:

• P&O announced that its entire fleet of cross-Channel ferries will be re-registered under the Cypriot flag, as the 182-year-old British maritime operator activated its Brexit plans.

• Sony confirmed it is moving its European headquarters from London to Amsterdam.

• The chief executive of luxury carmaker Bentley said the company was stockpiling parts and described Brexit as a “killer” threatening his firm’s profitability.

• Retailers Dixons Carphone and Pets at Home announced plans to shore up supplies in the event of chaos at British ports.

P&O, which began life as the Peninsular and Oriental Steam Navigation company in 1837, said all six of its cross-Channel ferries will be re-registered from the UK registry in Cyprus to keep EU tax benefits. The ferries include, the Spirit of Britain, the Pride of Kent and the Pride of Canterbury.

Sony confirmed it was merging its London-based European unit with a new entity based in Amsterdam that would become the new continental HQ. Sony said: “In this way we can continue our business as usual without disruption once the UK leaves the EU.”

The boss of Pets at Home, the nation’s biggest pet supplier, said his company had started stockpiling essentials – including cat food – as “we don’t want families to run out of food for their pets” after Brexit day on 29 March.

Sir James Dyson failed to appear at a media event at which his company announced the relocation of its corporate base from Wiltshire to Singapore. Dyson, who was a leading supporter of the leave campaign who urged ministers to walk away without a deal saying “they’ll come to us”, did not explain why he is taking the HQ of the firm he founded in 1991 out of the UK.

The chief executive of Dyson, Jim Rowan, said the move from Wiltshire to Singapore had “nothing to do with Brexit” but was about “future-proofing” the business. The move of Dyson’s legal entity from the UK to Singapore “will happen over the coming months”, meaning it could take place before Brexit.

The decision to leave the UK was made by Sir James together with “the executive team”, Dyson said. Sir James, who owns 100% of the company, has built up a £9.5bn personal fortune making him the 12th richest person in Britain according to the Sunday Times rich list.

A spokeswoman for the 71-year-old billionaire said he would “continue to divide his time between Singapore and the UK as the business requires it”.

His company employs 4,500 people in the UK out of a global workforce of 12,000. It said the HQ move would not affect British jobs

Rowan said moving to Singapore was part of “the evolution” of the company. When asked whether Dyson could still be referred to as one of Britain’s best success stories, he said the firm should now be referred to as a “global technology company”. When he was prime minister David Cameron hailed Dyson as a “great British success story”.

Sir James is not the first pro-Brexit billionaire to pull back from the UK since the referendum. Sir Jim Ratcliffe, the UK’s richest person with a £21bn fortune, was reported last year to be planning to leave Britain for Monaco.

Carolyn Fairbairn, director-general of the CBI, said the litany of business announcements should send politicians a clear and simple message. “A March no-deal must be ruled out immediately,” she said. “This is the only way to halt irreversible damage and restore business confidence.”

Theresa May told business lobby groups on Tuesday that she was refusing to rule out a no deal as she tries to persuade reluctant MPs to back her Brexit plan by arguing that the only way to avoid crashing out of the EU is to sign up to her proposals. That amounted to a rebuke to the chancellor, Philip Hammond, who suggested last week that a no-deal Brexit would be taken off the table in another conference call with 330 corporate executives.

Claire Walker, co-executive policy director at the British Chambers of Commerce (BCC), said it was a significant concern that businesses have been left “in the dark” about Brexit and are being forced to activate emergency plans for 29 March.

Adrian Hallmark, the chief executive of Bentley, said the luxury carmaker was on track to return to profit this year, but will fail to do so in the event of a hard Brexit. He said stopping production at the company’s Crewe plant would cost the Volkswagen-owned business millions of pounds a day.

“It’s Brexit that’s the killer,” he told Reuters. “If we ended up with a hard Brexit … that would hit us this year because we do have a potential to get beyond break-even to do the turnaround. It would put at fundamental risk our chance of becoming profitable.”

Dixons Carphone revealed on Tuesday it had been working with suppliers on a back up plan that would shore up its stocks of TVs and laptops. “We can’t rule out that there might be some form of interruption,” said Dixons finance chief Jonny Mason. “If there is, we are as well prepared as we can possibly be. Some suppliers have brought stock into the country so that it’s closer to where it needs to be for us.”