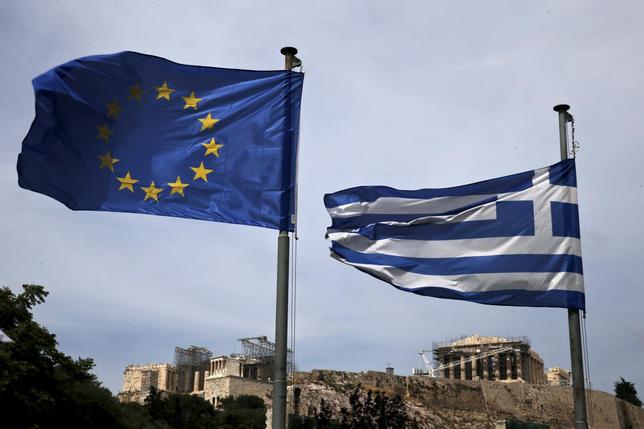 Greek Finance Minister Yanis Varoufakis may have been joking when he tweeted about Greece adopting bitcoin, but some financial technology geeks say an asset-backed digital currency could be a solution to the country’s cash crisis.

Greece faces 1.5 billion euros of repayments to its creditors this month, having been locked in talks on a cash-for-reforms deal for months. Failure to agree could trigger a Greek default and potential exit from the euro zone, dealing a big blow to the supposedly irreversible currency union.

In order to avoid such a “Grexit” some reckon Greece could adopt a bitcoin-like parallel digital currency with which it could pay its pensioners and public-sector workers. It could be called the “digi-drachma”, after Greece’s pre-euro currency.

But unlike bitcoin, which is totally decentralized and given value simply by its usefulness, it would be issued by the state and backed with the country’s substantial assets.

“If you’ve got all these assets, why don’t you use them to back up a digital currency?” said Lee Gibson-Grant, founder of Coinstructors, a consultancy for those wanting to use bitcoin’s underlying technology — the blockchain — to start businesses.

If Greece’s assets could be tokenized and issued as a digital currency, argues Gibson-Grant, public-sector wages and pensions could be paid with it. That would preserve scarce euros for repaying the country’s creditors and help avoid a sell-off of valuable assets at rock-bottom prices.

Varoufakis himself, who on April 1 tweeted a link to a satirical story that reported him as saying Greece would adopt bitcoin if a deal with its creditors could not be reached, blogged in 2014 about the possibility of a parallel “Future Tax (FT) coin”.

The FT coin, said Varoufakis, an academic economist whose radical-left Syriza party was then not yet in government, would be denominated in euros but backed by future tax revenues.

It would use a “bitcoin-like algorithm in order to make the system transparent, efficient and transactions-cost-free” and could provide “a source of liquidity for the governments that is outside the bond markets”.

Greece’s radical left is not alone in having considered a parallel currency. The European Central Bank has analyzed a scenario in which Greece pays civil servants with IOUs, which would rely on future tax revenue in a similar way to the FT coin, creating a virtual second currency in the euro bloc.

ECB experts decided it would not work, as public sector workers would receive payment in the IOU currency rather than in euros, putting further pressure on Greek banks because those workers were likely then to plunder their savings.

Furthermore, the basis for both such ideas relies on an implicit assumption that the Greek state will not collapse — by no means guaranteed in the current climate.

“This would be different to a distributed, trustless digital currency such as bitcoin, since holders would still have to trust the issuer,” said Tom Robinson, Chief Operating Officer at London-based bitcoin storage firm Elliptic.

For Garrick Hileman, an economic historian at the London School of Economics who specializes in alternative currencies, the problem with such a plan is that it does not deal with Greece’s most basic problem: the need to reduce its debt burden.

“There is a precedent for parallel currencies working,” said Hileman. “But the fundamental issue in Greece is the size of the debt and the fact that the economy is not growing, and you’ve got to find some way to in effect reduce that debt burden in Greece.”

If a digital currency has no place in a solution for Greece, the blockchain technology behind bitcoin — a globally distributed ledger of all of bitcoin’s transactions that is evolving beyond the world of digital currencies — might do.

The government of Honduras, for example, has recently gone into partnership with Texas-based technology firm Factom to build a secure and immutable land title record system using the blockchain to mitigate against fraud. And CEO Peter Kirby reckons Greece could use a similar system to deal with its tax-dodgers.

“With a true global distributed ledger that basically keeps track of everything that happens, you can start putting a lot more transparency into the way the Greek government does its business,” Kirby said.