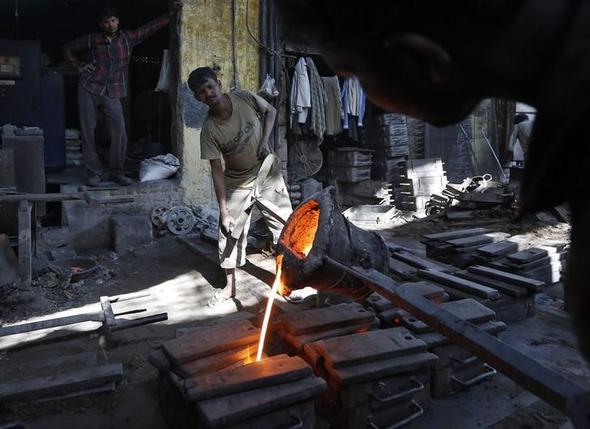 India’s industrial output grew at its fastest pace in five years in October, powered by manufacturing, bringing some cheer to investors fretting about a gridlock in parliament that has stalled vital reforms.

Output at factories, utilities and mines grew 9.8 percent on year, its fastest pace since October 2010, compared with a 7.8 percent expansion forecast by analysts in a Reuters poll and sharply higher than an upward revised figure of 3.8 percent growth in September.

While the October output figures were bolstered by a favourable statistical base, double-digit growth in the manufacturing sector points to a strengthening industrial recovery.

“The base effect has played a role, but there is also a sequential momentum for manufacturing driving the index of industrial production, which is a good sign,” Ghosh said.

Still, investors are worried about a persistent logjam in parliament that has hurt expectations for the early passage of a new sales tax.

Aimed at creating a customs union for India’s 1.2 billion people, the Goods and Service Tax (GST) is the biggest revenue shake-up since independence from Britain in 1947.

Supporters say it will add up to two percentage points to economic growth by replacing multiple federal and state tax levies, a chaotic structure that inflates costs for businesses.

Widely considered a low-hanging reform measure, the tax bill has now become a victim of a battle between Prime Minister Narendra Modi’s Bharatiya Janata Party (BJP) and the opposition Congress.

The Nifty closed nearly 1 percent lower on Friday to hit a three-month low.

While Asia’s third-largest economy has emerged as the world’s fastest growing major economy, it’s still not firing on all cylinders. Much of the steam comes from public spending rather than private investment.

A lasting industrial recovery is less likely without fixing structural bottlenecks such as the domestic tax system, reckoned Shilan Shah, an economist at Capital Economics.

“We are less bullish on the prospects for a renaissance in Indian industry over the longer term,” he added.

A government panel’s recommendations to revise up salaries of millions of government employees is expected to buttress consumer demand and underpin manufacturing activity.

Bolstering the outlook, consumer goods output – a proxy for consumer demand – grew 18.4 percent in October compared with a fall of 18.2 percent a year ago. Capital goods, a barometer of investments, surged 16.1 percent from a year earlier.