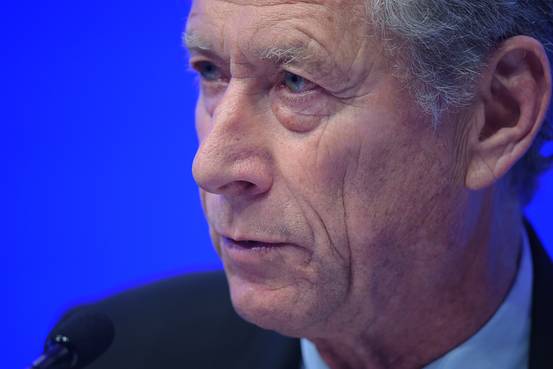 Olivier Blanchard, who presided as the International Monetary Fund’s chief economist during one of the worst global economic crises in the last century, is leaving the IMF.

He will head to the Peterson Institute for International Economics as the first C. Fred Bergsten senior fellow starting in October. There’s no word from the IMF as to his possible successor.

The former chairman of the economics department at the Massachusetts Institute of Technology started his job as the top economist at the world’s premier economic institution on Sept. 1, 2008, two weeks before the Lehman Brothers bankruptcy sparked a financial conflagration that pushed the global economy into recession.

“We have a live crisis on our hands,” Mr. Blanchard said on his second day in the post. The freshly appointed chief economist said the IMF would need to play three roles to help tackle the crisis: giving sound policy advice, providing clear economic-adjustment strategies for countries that need bailouts, and helping to foster better global policy coordination.

Six and a half years later, not all economists and member countries would say the fund has met those goals. But while the global economy is still struggling to overcome the legacies of the crisis, it is back on firmer footing and avoided what many experts say could have been global Great Depression. The IMF, which had been shrinking in significance before the crisis, regained its relevance as the world turned to the fund’s expertise to help navigate the stormy economic seas.

During Mr. Blanchard’s term, the IMF swelled its war chest to battle the crisis and bolstered its research and surveillance as it advised the Group of 20 largest developed and industrializing economies and the Financial Stability Board, the world’s most powerful central bankers.

“Progress is undeniable,” Mr. Blanchard said in his latest IMF blog post on the evolution economic policy-making in the wake of the crisis. But, he added, “Confusion is unavoidable, given the complex issues that still remain to be settled.”

The Frenchman says he now wants to solve some of those puzzles.

“Over the past eight years, I have had to think about too many issues, with too little time to think deeply about them,” Mr. Blanchard said. “It has been a fascinating eight years, but I now want to sit down and take the time.”

Adam Posen, president of the Peterson Institute, said Mr. Blanchard’s “decades of foremost intellectual leadership…have only been surpassed by his contributions in real-time to the IMF’s and the world’s response to the global financial crisis.”

Kenneth Rogoff, a Harvard University economist and former IMF chief economist, said Mr. Blanchard’s tenure will be remembered as “a golden era in research at the IMF.”

While Mr. Rogoff said the chief economist’s views were enormously respected by policy makers, “Nevertheless, he was not afraid to challenge fund dogma when he thought it way off, for example, on inflation targeting and fiscal multipliers.

“But on these occasions, it was always clear that he was trying to get it right, not to get attention.”

One of the IMF’s biggest mea culpas during Mr. Blanchard’s tenure was an admissionthat the fund underestimated the impact that budget belt-tightening would have on economies during a downturn, so-called fiscal multipliers. The fund’s advice to European economies in particular on that matter likely inadvertently caused sharper economic pains than necessary, prolonging and deepening the region’s stagnation.

“Olivier has constantly pushed the IMF to improve its methodology and analysis,” saidMeg Lundsager, a former U.S. representative to the IMF’s executive board who is now a fellow at the Wilson Center.

Desmond Lachman, a fellow at the American Enterprise Institute and former deputy director of the IMF’s policy department, said “there can be no question as to his having raised the standard of the IMF’s research department.” He praised the economist’s successful efforts to press the European Central Bank to be more aggressive in fighting deflation.

“Where he has been a lot more controversial and might have had questionable judgment was in his pushing the central banks of the major economies to raise their inflation target to 4%,” Mr. Lachman said.

Given that the IMF’s search process has yet to be officially launched, the IMF isn’t yet expected to name a successor.

Mr. Lachman said it will likely be tough to fill Mr. Blanchard’s shoes. “It will be difficult for the IMF to attract someone from academia with as strong a reputation as he has to replace him.”