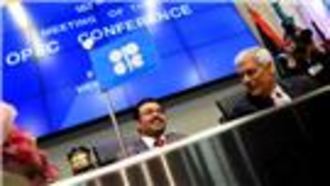 Vienna: Oil group OPEC agreed to stick by its policy of unconstrained output for another six months on Friday, setting aside warnings of a second lurch lower in prices as some members such as Iran look to ramp up exports.

Concluding a meeting with no apparent dissent, Saudi Arabian oil minister Ali al-Naimi said OPEC had rolled over its current output ceiling, renewing support for the shock market treatment it doled out late last year when the world`s top supplier said it would no longer cut output to keep prices high.

The Organization of the Petroleum Exporting Countries will meet again on Dec. 4, Naimi said.

With oil prices having rebounded by more than a third after hitting a six-year low of $45 a barrel in January, officials meeting in Vienna saw little reason to tinker with a strategy that seems to have resurrected moribund growth in world oil consumption and put a damper on the U.S. shale boom.

“You`ll be surprised how amicable the meeting was,” a visibly pleased Naimi told reporters after the meeting.

Oil prices rose by nearly $1 a barrel after the decision, paring some of this week`s losses on news that OPEC had not raised its output ceiling to match current output levels that are much higher, as a handful of analysts had suggested.

Friday`s decision defers discussion of several tricky questions set to arise in the coming months as members such as Iran and Libya prepare to reopen the taps after years of diminished production.

Iranian oil minister Bijan Zanganeh had promised to press the group for assurances that other members would give Tehran room to add as much as 1 million barrels per day (bpd) of supply once Western sanctions are eased. But most delegates saw little reason for Tehran to pick a fight now.

“When the production comes, this matter will settle itself,” one OPEC delegate told Reuters. That may not occur until 2016, according to many analysts who question how quickly Tehran will win relief from sanctions and be allowed to sell more crude.

Libya, still afflicted by a crippling civil war, hopes to double production to some 1 million bpd by September if key ports resume working, but past efforts have failed to deliver a sustained recovery in shipments.

Despite small gains on Friday, U.S. oil is on track for its first weekly decline since March as traders weigh deteriorating physical market conditions. But prices are still $15 off their lows, and some analysts see further gains ahead.

“The markets are moving in OPEC’s favour,” said Dr. Gary Ross, executive chairman of PIRA Energy Group. “Prices are stimulating robust demand growth and slowing capex. This was the objective of the Saudi strategy and it’s working.”

OPEC output has exceeded the group`s 30 million bpd ceiling for most of the past year, reaching 31.2 million bpd in May, its highest in three years, according to a Reuters survey.

Notably absent from this week`s agenda were efforts to push for output constraints – even from hawks such as Venezuela, which faces deepening budget woes at prices below $100 per barrel.

The U.S. tight oil industry has been more resilient than many had expected, with falling costs helping sustain the revolution and possibly setting up another downward spiral.

“Balances show we are oversupplied and OPEC is in pedal-to-the-metal mode,” said Bob McNally, founder and president of Washington-based consultancy The Rapidan Group. He said Brent crude could fall back to $50 a barrel.

It was not clear whether OPEC had made any decision regarding Indonesia`s request to rejoin the group after a more than six-year hiatus in its membership. Now a net importer of oil, Indonesia hopes to foster better dialogue between producers and consumers.