Skip to content
BANKING & SAVING
May 15, 2015 swarnali 0 Comments Stamping out the bonus culture triggered a sales slump at Lloyds - but insiders say there's a 'feedback' sting in the tail 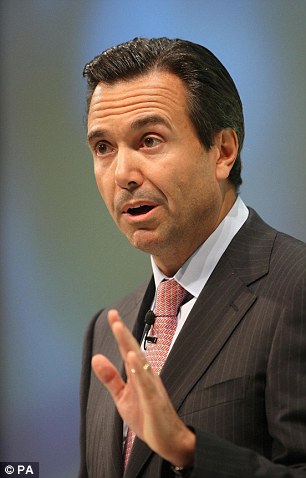 This is no ordinary phone call. ‘Today is going to be quite poignant, I think,’ says Owen Woodley, the man in charge of Lloyds’ High Street banking arm.

He’s on the line to around 2,000 Lloyds branch managers and regional directors from around the UK who have been ordered to dial in.

Mr Woodley is used to giving this type of conference call — they’re common for giant businesses with staff based around the country. Those invited to ring in do so by invitation only.

But a Lloyds insider has allowed Money Mail to lay bare what is really going on behind the scenes at Britain’s biggest bank.

Nice little earner: Part of Lloyds’ drive to become the best bank for customers is the apparent scrapping of sales targets

It has been involved in a series of scandals, and has so far had to pay out £12 billion compensation for payment protection insurance alone.

But it has pledged to wipe the slate clean. Part of this public promise was to put an end to the sales culture in branches.

This new regime has been in place since January. It’s proved popular with customers — but today staff know something is up.

Mr Woodley gets straight to the point. ‘We’re settling down into our world without sales targets,’ he says. ‘I thought it an appropriate time to share a bit more data with you — and some of it isn’t going to make very easy listening, I’m afraid.’

The figures he reveals next highlight exactly what happens when banks stop pushing products on their customers. In the first 12 weeks of this year, Lloyds ‘helped’ 45 per cent fewer customers in branches with loans. (Mr Woodley uses the word ‘helped’ when, really, what he means is ‘sold’.)

Falls for insurance and credit cards were even bigger.

HOW SALES HAVE FALLEN OFF A CLIFF

In the first three months of 2014 — when sales targets were still in place — 50,000 Lloyds insurance products were taken out. For the same period this year, after sales targets had been scrapped, just 15,000 were.

There was a similar reduction in credit cards.

It leads Mr Woodley to one conclusion: ‘Some in our team have forgotten what our core purpose is.’ But, he adds: ‘This is not the time for knee-jerk reactions.’

To you, if you were listening in, that’s not what it sounds like. It seems more like a call to arms.

Mr Woodley goes on: ‘We all have an opinion about what’s going on here, and I’ve talked to lots of you over the past few weeks about it, but what we’re certainly not going to do is go back to sales targets. That’s not the answer.

‘The answer is for every one of you to remind your teams every day about our reason for being here. You have to capture their hearts and minds.’

STOP THE HARD SELL: HOW WE HAVE EXPOSED PRESSURE SALES

This is Money’s Stop the hard sell campaign has opened an ugly can of worms with branch advisers revealing some shocking practices within banks and building societies.

Our investigations and those of our colleagues on the Daily Mail and Mail on Sunday have revealed how banks and building societies have pushed products on their customers.

We have called for an end to pressure selling and sales targets and a fairer deal for customers.

The sales data Mr Woodley reveals to his branch managers seems in stark contrast to the message senior bosses at Lloyds gave to investors last week.

In the bank’s first results announcement of the year, chief executive Antonio Horta-Osorio said: ‘We have made a strong start to the next phase of our strategy to become the best bank for customers and shareholders.’

Lloyds’ underlying profit had soared by 21 per cent to £2.18 billion.

Behind the headline figures, loans and advances to customers had fallen by 5 per cent, and customer deposits had dropped by 6 per cent. But Lloyds told shareholders these were principally relating to the split of TSB from Lloyds.

Part of Lloyds’ drive to become the best bank for customers is the apparent scrapping of sales targets.

Britain’s banks have been engulfed in scandal after scandal in recent years. The biggest, the mis-selling of payment protection insurance, landed them with a £26 billion compensation bill.

More than £12 billion of this has come from Lloyds, which is still part-owned by taxpayers and has around 30 million customers in the UK.

Its ruthless, bonus-driven culture landed it with a £28 million fine from the City watchdog in December 2013.

The situation had got so out of control that it handed its most prolific salesmen ‘grand-in-the-hand’ bonuses and bottles of champagne.

Mr Horta-Osorio vowed to clean up the culture at the bank when he took the helm in 2011.

The first new system he tried determined staff bonuses based on a ‘scorecard’ — this measured a number of qualities, including feedback from customers.

But bonuses were still largely assessed by how many products an employee sold, with staff earning points for each product. The more points, the bigger the bonus. And some products were worth more points than others.

For example, selling a £10,000 loan generated 550 points, while selling a junior cash Isa generated just 23. Staff who failed to hit their targets missed out on bonuses — an important incentive to personal banking advisers whose average starting salary is just £19,055.

Then, earlier this year, Lloyds took a dramatic new stance — all targets were apparently to be axed.

‘No one is going to have any opportunity, whatever level they are, to say they were incentivised to do something wrong,’ Lloyds retail boss Alison Brittain said.

The assurance was music to the ears of customers and many staff.

Lloyds introduced a variable pay scheme based entirely on feedback from customers. Instead of sales points, branches would get a ‘net promoter score’ — essentially, a measure of how good their customer service is.

It means that today, branches are categorised into zones one to five. Staff in branches in zone one are awarded the highest bonuses and those in zone five the lowest.

But despite the rhetoric, the Mail can reveal that the sales culture does not seem to have entirely ended. To qualify for a bonus, staff have to meet a set level, known as a minimum competency standard.

To reach this level, they have to sell a long list of products, including a fee-paying current account, a business account and a personal loan every three months.

STAFF CLAIM THEY CHEAT THE SYSTEM

A Lloyds adviser has told Money Mail: ‘These are hidden sales targets. In reality, bank managers and local directors expect us to sell all these products on a regular basis, and after every customer interview we have to show how we helped the customer — i.e. what we sold.’

On top of this, every three months the bank makes ten calls to customers to ask them about the service they have received.

One of the ten questions customers are asked is whether bank staff asked them about ‘any other financial products or services that might help you, beyond those you went to discuss’.

If the customer answers ‘yes’ that generates 50 points, which counts towards that branch’s customer service score. If the answer is ‘no’, the branch gets nothing.

The end result of this, though, is that failing to ask a customer about other financial products could be the difference between a branch manager in zone one missing out on a £2,478 bonus — or £1,859 if they are in zone two.

Mark Brown, general secretary of Lloyds Trade Union, said: ‘Staff are being incentivised to talk about other products and services even if they believe they’re not in the customers’ best interests.

‘Talking to customers about other products is the right thing to do, but not in all cases.

‘We are aware that some line managers are telling staff to make clear to customers the other products or services the bank offers just to get the 50 points.’ The adviser at Lloyds that Money Mail spoke to said employees were also trying to ‘play the system’ to boost their score and increase their bonuses.

‘Customers are asked to rate the service they received. But the problem is that salesmen are coaching customers to give them an excellent rating.

‘They are not allowed to do this, but they do so with branch approval. They are scared of getting a bad score as the management will get upset. So people try to cheat the system.’

Changing times? Lloyds has been involved in a series of scandals, but has vowed to wipe the slate clean

WHY SALES ARE NEVER MENTIONED

Yet even though Lloyds — albeit discreetly — kept an element of the sales culture, its switch in policy seems to have had a worrying effect on its bottom line.

In his conference call, Mr Woodley tells staff: ‘I expected an impact as a result of the changes that we made obviously, but the scale of that impact is making it clear to me at the moment that we’re not doing a good enough job for our customer.’

Again, by this he means selling enough products, because he goes on to say that the customer service satisfaction has hit levels ‘we would only have dreamed about’.

So what is the solution? The answer, when Mr Woodley delivers it, comes in the carefully scripted management speak of modern business.

‘Whatever job you do, I want you to think about how you can improve the quality, not the quantity, but the quality of the activity that’s going on in your team for our customers.’

Some customers, he points out, will tell you what they want. Others won’t.

‘The fundamentally important point,’ he says, ‘the essential purpose of our business, as you know, is to help Britain prosper and to enable our customers to prosper.

‘The only way we are going to do this is to use our expertise to improve their lives. That’s what we’re here for.’

Many managers remain cynical. One told Money Mail: ‘The language has changed, but what they’re doing is exactly the same. They’re just replacing the term “sales” with a different type of jargon.’

Customers are clearly more happy with the service. There seems to be no doubt that the bank genuinely wants to stamp out mis-selling.

But according to another manager at Lloyds, the tortuous conference call demonstrates that the bank’s attempts to reform its culture are ‘in chaos’.

He told us that it was struggling to reconcile the customer culture with the fact it was a commercial organisation, owned by shareholders — including British taxpayers — which wanted to make as much profit as possible.

Conservative MP Mark Garnier has lobbied for banking reforms. He said: ‘On the one hand banks appear to be genuinely trying to do the right thing. On the other hand they have to generate revenue.

‘Let’s hope that self-interest and cynicism do not pervade again at the expense of customers’.

Money Mail asked Lloyds why the sales figures revealed by Mr Woodley were not included in its recent results. It did not want to comment.

A spokesman for Lloyds said: ‘Our primary purpose is give our customers a great experience when they visit us and to find ways to help make them better off.

‘We make them better off by helping them to buy and protect their homes, providing a safe place for their savings and, for instance, by reducing their outgoings by enabling them to manage their money better.’

‘In that context, it is perfectly reasonable to keep our colleagues up to date on how the brand is performing, ensure that they understand the context of that performance and share feedback from our customers about the service we provide.’