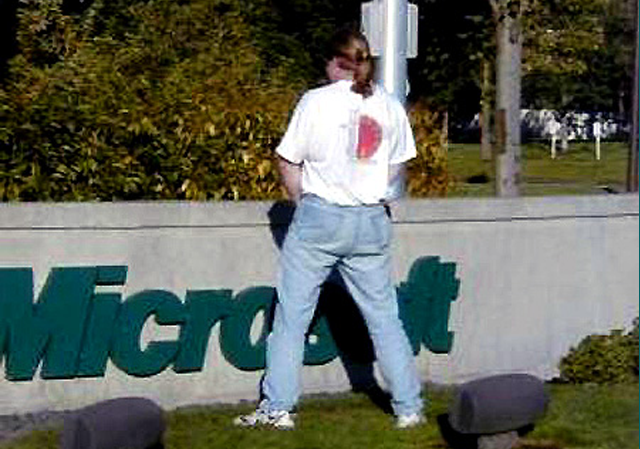 Two of my smartest friends and fellow curators wrote blog posts this week about customer service. They couldn’t have been more different.  And somewhere in between,  there’s an important distinction.  But before I make any conclusions,  let’s start by laying out the terms of engagement.

My pal Jason Hirschhorn publishes the widely read and influential MediaRedefined newsletter.  He’s a lifelong techy, and not someone who has unreasonable expectations about the world we live in.  He’s a rock-solid realist.  Now that said,  you don’t want to piss him off, because he has a sharp editorial voice – and when provoked is liable to unleash harsh criticism.

That said – I wasn’t expecting to see this picture at the top of his daily newsletter. Ouch.

And then… here’s what provoked it.

“Rantnrave:// Short your MICROSOFT stock. The most archaic company on earth. I used to kneel at their altar. They aren’t mean anymore or that good but they are (at least this lot) incompetent.”

Wow. Ok, i’ve had some issues with Microsoft software, but not sure I would use the word ‘incompetent’. Here’s Jason’s story:

“I spent 3 hours yesterday trying to re-download and reinstall my copy of OFFICE FOR MAC. It involved 3 online customer service chats, 2 calls, a request that I order a CD copy of the software, broken web pages, a valid software key that wouldn’t work and a 45 character digital ID that I had to manually type into an automated phone line.”
I’ve been through this – not with Microsoft but with Adobe. Long digital ID’s that you have to hand type in, and then they fail, and you have to start over. I get that piracy is a problem, but broken log ins and overly complex crypto-keys only punish honest customers.

Jason’s story continues: “At one point I threatened to shoot myself out of frustration and the customer service person in the chat window “hung up” on me. I told the next one that it was the worst web experience I’ve ever seen and that was saying something given I ran MYSPACE. I’m not doing it justice here. Single worst customer service ever. PHILIP K. DICK would find the whole affair farfetched. But a rep named FLORENTINO did solve it eventually. It was like TWILIGHT ZONE + OUTER LIMITS + KAFKA and then some… ”

Ok, so customer service is bad. Way bad. Until you read this post from Lauren Zalaznick in the LZ Sunday Paper.

So, my head is about to explode – given Jason’s powerful rant, and then Lauren’s equally emphatic rave. She explains: “Just this week, I engaged with a huge number of customer service reps. Here is a sampling: Federico from Amex Platinum Travel customer service phone line let me know that even with the penalty charges I might have to pay to change the date, the frequent flier ticket to London that I had purchased directly through an airline was indeed a better deal than the $13,872.00 ticket they could offer me. Even though I don’t think I have ever once found a better deal through this service whose membership costs about the price of a coach ticket to LA, they are always so nice that I feel compelled to pay $450.00 every year and keep trying. Thank you, Amex Platinum!”

Amex Platinum, check. Next up – Zappos, Lauren continues:
“Also last week, I had to send back a pair of sneakers (that lasted just under a month before disintegrating) to a well-known on-line shoe company. Okay I’ll brag, not everyone is a VIP member of Zappos like me! They are in the category of SUPER-DUPER NICE new-fangled digital-only companies who use the word “awesome,” irony-free. They even sent a message “With Love,”

And Lauren’s experience aren’t all virtual either. When her SubZero ice maker went on the fritz, she had a local repair man in to get the cubes back to their proper frozen state:

The call when out to L&J appliance: “well, not only was Antonio extremely prompt, he explained exactly what he was going to do and for what price. He single-handedly took out the two fully-loaded freezer baskets. And then stunned me by asking for paper towels and Fantastik. On his hands, knees, back, and sometimes stomach he proceeded to wipe out the many years of frozen gunk, crumbs, dirt, and other whatnot that had collected. Antonio assured me that this was “perfectly normal accumulation.”

I think that there’s a critical difference here. Companies trying to protect large, established, at risk businesses – and a new era when customers have power to blog, tweet, post, and make it known when their unhappy. Now, to be fair, Lauren’s experiences with Amex Platinum might not the be same if she had plain old Amex Green – but generally speaking companies that care about customer service radiate that from the top down.

So, the optimist in me says we’re arriving at a new day where folks like Tony Hsieh at Zappos are able to make the argument that great customer service is an investment in marketing – not a favor but a necessity. And that treating customers well in a world of less and less barriers to entry can be the difference between the past and the future.