Skip to content
INDUSTRY
May 12, 2015 swarnali 0 Comments Mitsubishi Heavy Industry 'Is Back' And A Buy, Whither Japan Stocks: Under New-Style Management 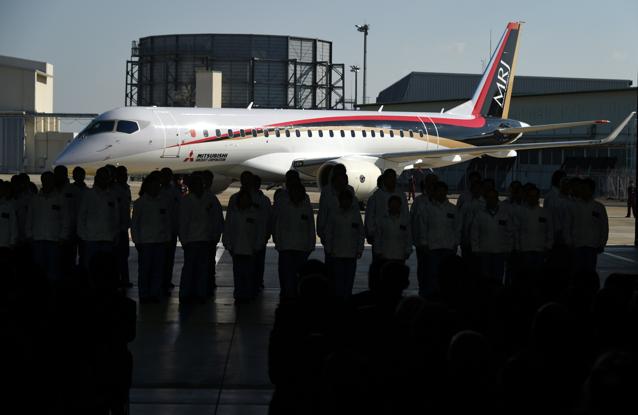 I have written before how vitally important it is for Japan and the standard of living of its citizens that its greatest manufacturing companies, famous names like Hitachi (ADR symbol HTHIY) and Mitsubishi Heavy Industries (MHI) (ADR symbol MHVYF), remain strong, profitable, growing global competitors.

To an even greater extent than for Hitachi, this is true for MHI. (Disclosure: I have a small position in HTHIY and have begun accumulating MHVYF.)

MHI’s recent surge is the market’s response to the company’s new 3 year business plan (ending FY2017–March 2018) and, more importantly, the credibility gained over the past two years by MHI’s senior management.
CEO of Japanese company Mitsubishi Heavy Industries Shunichi Miyanaga poses prior to a hearing in front of members of the Commission of Economic Affairs at the French National Assembly in Paris on June 17, 2014. A battle was shaping up on June 17 to take control of French industrial jewel Alstom after Siemens and Mitsubishi unveiled their counter-offer to a bid from US giant General Electric. AFP PHOTO / DOMINIQUE FAGET (Photo credit should read DOMINIQUE FAGET/AFP/Getty Images)

Notwithstanding the myth of the tradition-bound, consensus-following CEO, many, if not most, Japanese CEOs have highly individualistic styles, visions, and ideas, and are expected to–and do–lead their companies in new directions.
A long article in the April 27 Nihon Keizai Shimbun online edition focuses how, as with chairman and CEO Nakanishi Hiroaki at Hitachi, a new style of execute management in the persons of MHI chairman Omiya Hideaki and president and CEO Miyanaga Shunichi is boldly taking on the seemingly intractable cultural and obstacles to profitable growth at MHI.
The 3 year plan unveiled on May 8 sets a goals driving consolidated group top line revenues up 25%, or JPY 1 trillion (USD 8.3 billion), to JPY 5 trillion (USD 120 billion) by the fiscal year ending March 2018. Order volume is forecasted to rise from last year’s JPY 4.7 trillion (of which 54% is from off-shore markets) to JPY 5.5 trillion (64%).

Investment during the period will rise 15% over the previous plan period to JPY 630 billion (USD 5.25 billion).

“The lost 30 years.” Thus has Omiya lamented MHI’s performance from the 1980s, when the sales peaked at some JPY 3 trillion (USD 25 billion), stagnating in the JPY2-3 trillion range until 2013. Growth seemed to have become impossible.
Siemens CEO Joe Kaeser (R) and Mitsubishi Heavy Industries CEO Shunichi Miyanaga (L) pose after a press conference in Paris on June 17, 2014 about their proposal for Alstom. Mitsubishi Heavy Industries (MHI) shares fell on June 17 as investors reacted with disappointment to the Japanese firm’s joint bid with Siemens for the energy assets of French giant Alstom. AFP PHOTO ERIC PIERMONT (Photo credit should read ERIC PIERMONT/AFP/Getty Images)

This was easy to explain: the Japanese domestic market, as measured by GDP expressed in Japanese yen, was shrinking. Any large company in a mature industry focused on and largely serving this market would not expect much, if any growth in sales. So it was with MHI.

Such moves are being taken together with group-wide restructurings, downsizings, and, most importantly, globalizing initiatives in all areas, including personnel, similar to those being put into place by Hitachi Ltd.’s Nakanishi.

A key approach adopted at both companies is mandating that operations formerly managed as “divisions” operate as and account for themselves as separate “companies,” responsible for meeting discrete profitability, efficiency, and ROE targets. Such disciplines have been revolutionizing management culture and improving performance.

In a highly symbolic move, in February this year Miyanaga decreed that the civilian commercial ship building division will in October be “spun off” as a separate company. Following this, it will explore tying up or merging with other companies.

Shipbuilding is deeply rooted in MHI culture and company lore. MHI’s shipyards at Nagasaki built the massive, 263 meter Musashi battleship, by some measures the largest such ship at the time. After Japan’s WWII defeat the yards were placed in service building tankers and passenger cruise ships, but growth and profitability in this business has been increasingly unattainable. Essentially “cutting loose” this business division manifests a new rigor and results-orientation in MHI management culture.

Miyanaga’s appointment itself has been a mold-breaker, ending some 40 years of CEOs whose backgrounds were in technical and engineering fields. Miyanaga is considered a non-technical manager and administrator.
A Mitsubishi Regional Jet (MRJ) moves into the hanger for a ceremony at the Nagoya airport in Komaki, Aichi prefecture on October 18, 2014. Japan’s Mitsubishi Heavy Industries rolled out the first made-in-Japan passenger aircraft in nearly five decades on October 18 as it pushes into the booming regional jet sector with an eye to taking on industry giants Embraer and Bombardier. AFP PHOTO / TOSHIFUMI KITAMURA (Photo credit should read TOSHIFUMI KITAMURA/AFP/Getty Images)

In meeting the challenges of MHI’s major new strategic initiative–the Mitsubishi Regional Jet (MRJ)–Miyanaga is proving again his willingness to break tradition. Under CEOs seconded to the MRJ production subsidiary, Mitsubishi Aviation Corporation (MAC), from MHI’s aviation and space division, the MRJ project has repeatedly missed deadlines. The project–with deliveries to final buyers now set for 2017–is some two years behind original schedules.

Miyazawa recently announced appointment of a new MAC CEO with no background in MHI’s aviation or space divisions, indeed with no aviation industry experience. His background is in MHI’s electric power generating equipment divisions. The appointee is, however, a strict manager who can be expected to meet deadlines and financial targets.

In short, the changes we see happening at Mitsubishi Heavy Industries bode well both for MHI shareholders and for Japan.