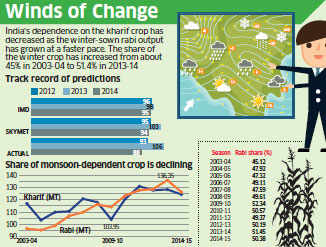 NEW DELHI: Private forecasters are counting on temperature changes in the Indian Ocean to strengthen the monsoon current like it did in 1997, when rainfall was normal, despite a strong El Nino. While forecasters are divided about the monsoon outlook, experts say that India has become less vulnerable to monsoon rain as the share of winter-sown crops has risen over the years, while only 40% of rural households depend on agriculture as their primary source of income.

The India Meteorological Department has forecasted weak monsoon rain this year, but private forecaster Skymet remains bullish on rains. Its forecasts in the past three years have been closer to the actual rainfall compared with the weather office.

The weather office expects monsoons to reach the Kerala coast in a day. “In the next 24 hours, by Friday afternoon we should declare the onset of monsoon after a final discussion with meteorologists. All the major parameters for monsoon to be declared have been met,” said DS Pai, India Meteorological Department’s head of long-range forecasting. Swati Basu, the director of National Centre for Medium Range Weather Forecasting, said the monsoon’s progress will be weak after it sets in.

Agriculture experts said that even if the monsoon is below normal, what matters more is the spread of the summer rain, and that the country’s food stocks are adequate to meet any shortfall.

Also, over the years, India’s dependence on the kharif crop has decreased as the winter-sown rabi output has grown at a faster pace. The share of the winter crop has increased from about 45 per cent in 2003-04 to 51.4 per cent in 2013-14.

It has dropped a percentage point in 2014-15 as unseasonal showers in March and April damaged crops. However, rice production depends heavily on the monsoon season. Kharif rice output is generally around 90 million tonne, while the winter harvest contributes barely 13-15 million tonne.