Skip to content
Education
November 5, 2019 Loknath Das .me, a, bureaucracy’:, educational, for, huge, is, like, Needs, of, on, parents, Relief, Report, special, ‘Treacle 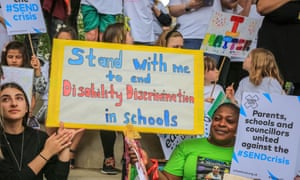 Being the parent of a child with special needs and facing the education system’s serial obstacles and complexities can leave you bereft of hope. The world of special educational needs and disabilities – or SEND – is a sea of acronyms, arcane officialspeak and labyrinthine processes, to the point that those of us at its heart often feel completely lost.

But if there is a key cause for optimism, it is the recent report by the Commons education select committee into the SEND system. What a tremendous relief to pick up the report last week and be instantly be hit by its bluntness. The product of 18 months of work by cross-party MPs, its 127 pages focus on the practical results of the 2014 Children And Families Act, and drastic changes to special needs provision in England against a background of cuts and political confusion and paralysis.

It is unsparing: “The 2014 reforms have resulted in confusion and at times unlawful practice, bureaucratic nightmares, buck-passing and a lack of accountability, strained resources and adversarial experiences,” it says. Local authorities, given the responsibility for enforcing the legislation, have been “set up to fail” while parents and carers have to “wade through a treacle of bureaucracy, conflict, missed appointments and despair”.

The evidence, based on more than 700 written and oral contributions, is just as hard-hitting, as are its recommendations. To declare an interest: as the parent of an autistic child, and a journalist who writes regularly on SEND issues, I was among the witnesses.

This is not to say that the report is definitive, nor that its prescriptions for change would correct all the system’s deepest faults. But as one of the most ambitious inquiries ever put together by a select committee, it is a milestone.

As the system has been reordered around the new Education, Health and Care Plans (EHCPs) and entitlements, the noise around SEND has rapidly increased. TV news now regularly runs stories about poor provision and people’s deep grievances. Whereas once fellow parents viewed the SEND world as something alien and complex, I get the sense that increasing numbers now know roughly what is going on, and how bad things have become.

The internet has ensured that thousands of people with a direct interest are more connected than ever before. Obviously, this is nothing but a good thing, but their involvement is hampered by ingrained top-down thinking, and a failure to understand that parents should be centrally involved, not thought of as grateful recipients of whatever the state can offer.

The stereotypical bureaucratic attitude is grimly illustrated by evidence to the inquiry from Staffordshire county council’s chief executive, who complained that parents “were able to access so much information that they had formed opinions before they had met with the local authority” and that some organisations were using “aggressive marketing”, including legal advice for parents on how to get the local authority to pay for them.

One key challenge is to ensure SEND systems can accommodate those who want to be active participants in their child’s education, but not marginalise those who do not have the time or resources to do the same.

The report makes the case not only for more money, but for increased accountability, partly though Ofsted and the local government ombudsman, and a drive to ensure that schools’ special educational needs co-ordinators – AKA Sencos – can do their jobs properly. Perhaps most helpfully of all, it proposes that parents and carers entering the system ought to be supported by neutral SEND specialists who can guide them through the system’s mazes.

These are important ideas, but in the here and now, they may be less significant than the committee’s fierce sense of purpose and clarity. That is the source of optimism. As a parent, I want more interventions like this – which might at last lead to a system as open and understandable as the report itself.