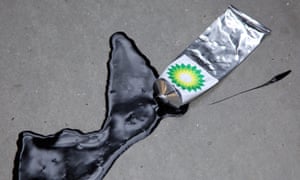 Even if you didn’t glimpse the BP-branded sea monster that invaded the British Museum during a protest in September, and managed to avoid a naked man being slathered with oil at Tate Britain, you’re unlikely to have missed the bitter guerrilla war raging between Big Oil and sections of the art world.

For a while, it looked as if the protesters had the upper hand. In March, BP announced that, owing to an “extremely challenging business environment”, it wouldn’t be renewing a sponsorship deal with Tate that had been in place for 26 years. Activists promptly hailed this as a brilliant victory, and a parting of the ways with the Edinburgh international festival swiftly followed. But then in July, the company indicated that it wasn’t done yet, announcing that it would continue funding other leading institutions to the tune of £7.5m over the next five years. Tate’s loss appears to be the Royal Shakespeare Company’s gain (or, given the politics, possibly it’s the other way around).

The controversy got so heated that, earlier in the summer, Arts Council England and campaigning group Index on Censorship produced a report advising organisations on how to head off “ethical and reputational” issues before they reached sea-monster-critical levels. (A parallel report advised organisations on how to coordinate with police forces, should things get really out of hand.)

For some people who work in the arts, the issue is clear: oil companies are the enemy, and their support of cherished cultural institutions is a cynical attempt at “greenwashing”. Speaking in October, the actor Mark Rylance suggested that for BP to bankroll museums and galleries was merely a “calculated advertising ploy”.

Making a Radio 4 documentary about the tangled issue of corporates and arts sponsorship, I’ve been struck by how the arguments are rarely straightforward. Oil money, for instance, is a tiny slice of the pie – that controversial Tate sponsorship amounted to an estimated 0.5% of the organisation’s annual turnover. Is this evidence that such companies wield far more influence than they pay for – or that the issue has been blown out of all proportion?

Are arts organisations obliged to probe the bank accounts of individual donors? How clean does clean need to be?

Then there’s the fact that hard distinctions between “good” money and “bad” are often anything but. In terms of climate change, is being financed by a company that extracts oil worse than being financed by a car-maker, or even by people who drive or fly a lot? What about banks, which caused the financial crisis, or the big accountancy and consultancy firms that stood by and let them? Then there are all those foundations, whose money may be inherited from historically dubious sources – are they off limits? Are arts organisations obliged to probe the bank accounts of individual donors? In short, how clean does clean need to be?

Surely there’s a more overriding point: that if funding accomplishes some form of social good, that is in itself an argument for keeping it. A hard-headed question quickly follows: if oil companies stopped pumping money into the arts, where would that cash actually go? Isn’t it better that it helps to subsidise theatre tickets and enable museum loans rather than disappearing into the pockets of shareholders? In New York, I asked the director of the Metropolitan Opera, Peter Gelb, what his view was. He’d love to have such a problem, he sighed – most American energy companies regard opera as too highbrow by half. Few, if any, would come near it.

One thing we can be sure of is that this funding controversy will only intensify. Government funding for UK arts organisations has been cut by nearly a third since 2010. According to an increasingly depressing series of reports by the research group GPS, the problem outside London is particularly acute, despite recent attempts by the Arts Council to rebalance things: public cultural spending is £4.91 a head per year outside London, £65.18 within. Much though we might wait for Philip Hammond to take a leaf from the German government’s book and increase arts funding as a response to economic uncertainty, there seems more chance of Beckett’s Godot finally turning up. For those of us who care about the arts, corporate cash might be the best hope.

Perhaps there’s one thing we can learn from all this: we are long overdue a proper public debate, one that sees the issues from every side. Making the programme, I was surprised to learn that when three of the four major organisations funded by BP were approached, none would give us an on-the-record interview on the subject, and neither would Tate. As that Arts Council report recognises, too few institutions are transparent about the way they handle corporate funding, or how they police the ethical dilemmas that attend it. Decision-making is often murky, and accountability vague; those of us who love and support the arts aren’t invited to give our view, still less suggest how some of these problems should be solved. No one benefits from a culture of silence.