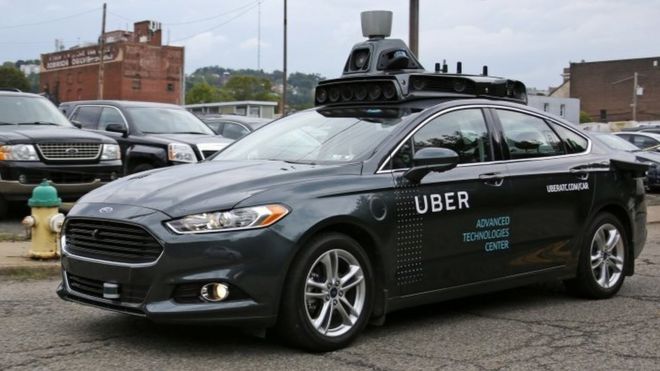 Ride-sharing service Uber has acquired a New York-based artificial intelligence start-up which it hopes can speed up its progress in creating self-driving cars.

The deal, for an undisclosed sum, will see Uber gain 15 specialist researchers who will form a new division at the company known as Uber AI Labs.

Geometric Intelligence’s co-founder Gary Marcus told the BBC the team would have a wide brief – ranging from improving traffic predictions to working towards a future of flying cars.

Recent reports have suggested Uber’s aggressive growth, which has required heavily subsidising fares, meant the firm lost more than $2bn (£1.6bn) last year. That figure is likely to go up in 2016.

But Uber’s chief product officer Jeff Holden said the enormous losses were not a serious concern to the company.

“We’re actually in very good shape,” he told the BBC.

“Those sorts of things look bad from the outside.”

Regardless, Uber is pushing forward with attempts to become a far more efficient transport company.

In the near term, that means the new AI team will be improving on the company’s ability to predict when and where cars may be needed, drawing in data from various factors, such as weather forecasts.

Longer term it means accelerating the roll-out of Uber’s self-driving car fleet, which is already being tested on roads in Pittsburgh and San Francisco.

Currently, those cars, made by Volvo, have a person sitting at the wheel ready to take control.

But eventually the aim is to remove the need for a human altogether, putting the several hundred thousand Uber drivers out of a job.

“Historically what you’ve seen is as technology has taken jobs away from people, new jobs have opened up,” Mr Holden said.

“The way I think about it is there are trade-offs, but one of the plusses is that eventually the roads are going to be much safer for people.”

Looking further into the future, Mr Marcus imagines a world of flying cars taking us to work.

“They’re going to allow people to take long commutes at 75 or 150 mph where you’d otherwise get stuck in traffic. It’s really, in a not-too-distant future, going to be something that is practical.”

The Geometric Intelligence team will become Uber employees and most of the team will relocate to Uber’s headquarters in San Francisco.

The start-up has up until now been funded by private investors and will maintain its close ties with New York University.

Mr Marcus said his company stood out because it used a different approach to artificial intelligence, one which takes inspiration from how a child’s brain develops, particularly when discovering language.

Companies like Facebook and Google are investing heavily in so-called “deep learning”. This technique involves feeding a computer millions of pieces of information, such as images, so it can learn patterns and begin to recognise objects and categorise what it sees.

“Deep learning is not all that it’s cracked up to be,” he said.

“It’s very good for certain problems, but it doesn’t allow us to do the kind of inferences that people often do. We need next-generation techniques.”

Existing technology is promising, he said, but has too low a success rate to be considered safe to use in self-driving cars.