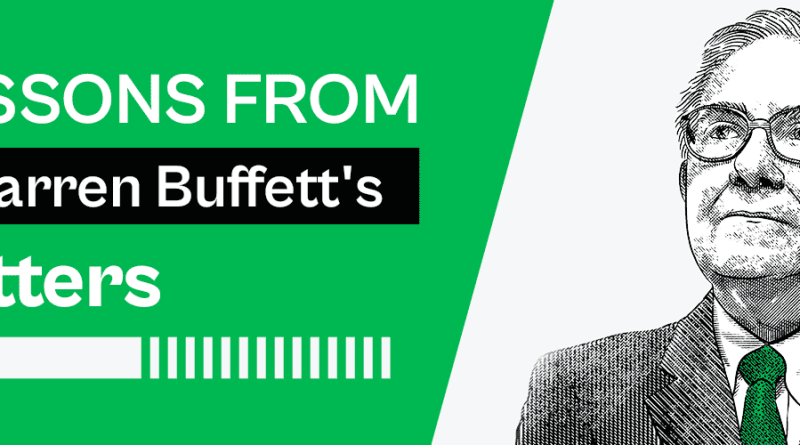 Warren Buffett, the CEO of Berkshire Hathaway, is one of the most successful investors of our time. But there is more to the Oracle of Omaha. Buffett is an amazing writer as well. Every year he writes an annual letter to the shareholders of Berkshire Hathaway. And as expected, Warren Buffett’s annual letters to shareholders are one of the most anticipated events in the financial industry. Not just because one of the richest investors in the world is writing them, but also because he imparts general investing wisdom in straightforward prose that anyone can understand.

All these letters are made available on Berkshire Hathaway’s website. You can take a glimpse of how he and his whole team thinks about the investment strategy, stock ownership, company culture, etc. Since there are many letters, we have compiled them into 9 important lessons in this blog.

1. Executives Should Only Eat What They Can Kill

Rewarding key managers for meeting their targets is a common practice across companies. But contrary to most organizations, Berkshire Hathaway does not use the stock price as its yardstick to measure performance.

Warren Buffett’s annual letter in 1985 noted, “We believe good performance should be rewarded whether Berkshire stock rises, falls, or stays even. Similarly, we think average performance should earn no special rewards even if our stock should soar”.

Later, in his annual letter of 1991, Warren Buffett complimented the executive compensation plan of one of its subsidiaries, H. H. Brown. He gave a percent of profits post deducting a charge for capital employed instead of offering stocks or guaranteed bonuses to every manager.

In other words, each manager at H. H. Brown would receive a portion of the company’s profits minus the amount that they spent in terms of capital. It puts the managers truly responsible when they make capital allocation decisions. This fits in perfectly with Buffett’s version of “eat what you kill” doctrine of executive compensation.

2. Buy Stock To Own, Not Speculate

It’s commonly seen that most investors become price-obsessed upon buying a stock. Post-that, they constantly keep on checking the stock’s price multiple times during the day. Several individuals find it arduous to resist the temptation of checking the price many times a day. In this context, Warren Buffett’s annual letter in 1996 made an interesting point. He said: “If you aren’t willing to own a stock for ten years, don’t even think about owning it for ten minutes”

Essentially, Buffett drives the point that instead of bothering with the daily movements, you should aim to look for certain things. For instance, companies that make great products have strong competitive advantages and offer consistent returns in the future. So, “always invest with an owner’s mentality”.

Several companies have tangible assets and intangible assets. For Buffett, it’s the intangibles that are of the utmost importance. But what might come as a surprise is that there was a time when Buffett did not believe in the power of intangibles.

Warren Buffett’s annual letter in 1983 notes that: “I was taught to favor tangible assets and to shun businesses whose value depended largely upon economic goodwill. This bias caused me to make many important business mistakes of omission, although relatively few of commission.”

Finally, it was Berkshire’s acquisition of “See’s Candy Stores” that changed his outlook and attitude towards intangibles. When Berkshire bought See’s Candy in 1972, it had a post-tax income of about $2 million on a net tangible asset base of $8 million. Now, for a shop chain like See’s Candy Stores, a 25% return on assets far exceeded industry expectations.

But by 1982 (10 years after the acquisition), See’s Candy had witnessed post-tax profits of $13 million on a $20 million net tangible asset base. Thanks to non-tangible assets like the goodwill factor, the return on assets had jumped from 25% to 65% over the decade. This supports a wonderful quote said by Warren Buffett – “Goodwill is the gift that keeps giving”.

Buffett believes that the stock markets are generally efficient. In that context “timing” one’s entry and exit in the market with considerable success is next to impossible.

That said, Warren Buffett’s annual letters have often emphasized the fact that there are and will continue to be phases like natural disasters, wars, crashes, bubbles, etc. Warren Buffett’s annual letter of 2017 noted: “Though markets are generally rational, they occasionally do crazy things. Seizing the opportunities then offered does not require great intelligence, a degree in economics, or a familiarity with Wall Street jargon”.

In other words, Buffett believes that savvy investors should continually look at the fundamental value of companies. If investors can do that, they’ll naturally tend to go in the opposite direction of the herd and derive excess profit from it. In Buffett’s words, “Be fearful when others are greedy and greedy only when others are fearful”.

5. Don’t Invest In Businesses That Are Too Complex To Fully Understand

In 2016, when Berkshire Hathaway announced that it was taking a $1 billion stake in Apple, it left many investors surprised. Why? Well, Buffett had long claimed to have an “insufficient understanding” of technology and tech companies.

Warren Buffett’s annual letter in 1986 noted: “if there’s a lot of technology, we won’t understand it”. On the contrary, this doesn’t mean Buffett was inflexible concerning technology. Before investing in a company/sector, he wants to have a clear idea of the growth potential, the competitive advantage, and the durability of that advantage.

In May 2018, Buffett passed a flak comment to the Bitcoin buyers. He said: “Just hoping that the next guy pays more” for an asset does not hold any intrinsic value. So, think twice before you leap into something that’s complex for your own understanding.

6. Never Invest Just Because You Think A Company Is Cheap

Who doesn’t love a bargain? As a student of Benjamin Graham’s, it was preordained that Warren Buffett should also imbibe the “buy cheap” approach. Surprisingly, that was not the case. And Warren Buffett learned a big lesson on account of a series of poor acquisitions and investments that he had made in his early investing career.

Warren Buffett’s annual letter in 1979 mentioned some of his investing mistakes. He refers to his Waumbec Mills purchase which Berkshire bought at a price lower than the business working capital. Well, it looked like an incredible deal but the acquisition still turned out to be a mistake for Berkshire Hathaway.

The reason is no matter how hard the company worked to turn the struggling business around, it could never get any traction. Plus, the textile industry had simply gone into a spiraling downturn. This experience taught Buffett the importance of return on capital and having an economic moat.

In Warren Buffett’s annual letter, 2014, he noted: “At Berkshire, we prefer owning a non-controlling but substantial portion of a wonderful company to owning 100% of a so-so business. It’s better to have a partial interest in the Hope Diamond than to own all of a rhinestone”

7. Embrace The Virtue Of Sloth

Many would imagine a successful investor as someone who is hyperactive. Or someone who’s constantly on the phone making deals for a living, talking to traders, and networking. And then there is Warren Buffett, who advocates a much more passive approach to investing.

Warren Buffett’s annual letter in 2005 noted, “Long ago Sir Isaac Newton gave us three laws of motion. It’s a genius work but Sir Isaac’s talents didn’t extend to investing. He lost a bundle in the South sea bubble, explaining later that ‘I can calculate the movement of the stars but not the madness of men.’

Buffett further added, “If Newton had not been traumatized by this loss, Sir Isaac might well have gone to discover the fourth law of motion for investors as a whole, returns decrease as motion increases.” To sum up, for retail investors, the real action is in inaction.

If there’s anything that infuriates Warren Buffett, it’s the practice of taking loans to purchase stocks. As per Warren Buffett, when ordinary people borrow money to buy stocks, they are putting their livelihoods in the hands of a swinging market that can be random and violent. This goes the same when it comes to a reliable stock like Berkshire Hathaway as well.

Warren Buffett’s annual letter, in 2017, illustrated this point as well. He showed the four major dips Berkshire stock had suffered in its history. The dips witnessed price falling by 37% or more in a span of just a few weeks.

In that context, Buffett wrote: “This table offers the strongest argument I can muster against ever using borrowed money to own stocks. There is simply no telling how far stocks can fall in a short period. And even if your borrowings are small and your positions aren’t immediately threatened by the plunging market, your mind may well become rattled by scary headlines and breathless commentary. And an unsettled mind will not make good investing decisions”.

9. Time Is The Friend Of The Wonderful Business, The Enemy Of The Mediocre

Buffett often says that buying Berkshire Hathaway – the textile company – had been his biggest mistake as an investor. Well, there’s some truth attached to this story. After all, he had deployed capital into a mediocre, decelerating, capital-guzzling business. If he had steered his money into insurance companies, he could have made $200 billion additional returns over the next 45 years.

This compounding nature of time and returns are best described in Warren Buffett’s annual letter of 1989. He said, “time is a friend for wonderful businesses and an enemy for the mediocre ones”.

To put it more precisely, Buffett says that holding a business that is not generating value is likely to hurt an investor over the long run. They give below-par returns and rob the investor of getting better investing opportunities.

So, instead of buying mediocre businesses and praying for them to come to full value, Buffett advocates looking for quality businesses. The ones that are not only capable of generating a healthy return but are also able to reinvest the capital at similarly healthy returns. Thereby making them compounding machines. These types of businesses represent the Holy Grail of investing. Once you find them, it’s in your favor to plant the right seeds and watch them grow, rather than continually looking for new flowers to pick.