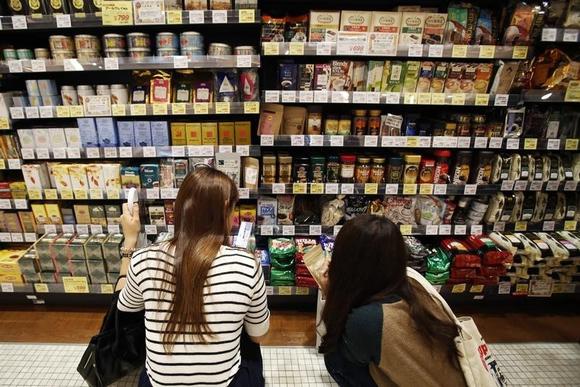 (Reuters) – Japan’s core inflation is seen slowing for a sixth month in January while factory output is expected to rise, underlining the policy challenge facing the Bank of Japan as it strives to speed up economic growth and achieve its 2 percent price target.

Hit by tumbling oil prices, that inflation number is not even quarter of the way toward meeting the BOJ’s goal.

“Core CPI has been on the decline and there is a high possibility sharp falls in oil prices further push down consumer inflation toward the middle of this year,” said Naoki Iizuka, economist at Citigroup Global Markets Japan.

On the bright side, factory output is expected to jump in January, up for a second straight month, and analysts are predicting a production uptick for a wide range of industries thanks to a recovery in exports.

The Bank of Japan is counting on exports to help offset the still-weak private consumption, and for weak oil prices to spur companies to spend more, helping the economy gather speed after last April’s sales tax hike tipped it into recession.

Core CPI, including the effects of the tax-hike, was forecast at an annual 2.3 percent in January, down from a 2.5 percent rise in December, according to the poll of 22 economists.

The nation’s factory output is seen jumping 2.7 percent in January from the previous month, the poll showed. In December, output increased 0.8 percent on-month, after a 0.5 percent fall in November.

“Broad range of industries are expected to show production expansion due to recovery in exports and capital spending,” said an analyst at Shinkin Central Bank Research Institute in the survey.

“We expect factory output will continue to stay on a recovery trend as a pickup in export is spreading.”

Analysts are also keeping an eye on manufacturers’ output forecasts for February and March, which will also be released at the same time.

The poll found the jobless rate stood at 3.4 percent in January, unchanged from December and stayed at the lowest level since August 1997. The job availability ratio was probably steady at 1.15, staying at the highest level seen in March 1992.

Household spending is expected to have fallen 4.1 percent in January from a year earlier partly due to bad weather, down for a tenth straight month, the poll showed. And retail sales are set to fall an annual 1.3 percent last month, down for the first time in seven months.

Data earlier this month showed the economy rebounded from recession in the final quarter last year but growth was weaker than expected as household and corporate spending disappointed, underlying the challenge premier Shinzo Abe faces in shaking off decades of stagnation.

The internal affairs ministry will release CPI data at 8:30 a.m. on Feb.27 (2330 GMT Feb. 26). Jobs related data and household spending will also be announced at the same time.