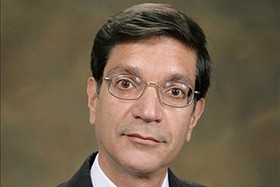 Given the plunge in oil prices Friday, it’s obvious that the market was disappointed that the Organization of the Petroleum Exporting Countries didn’t cut production as many had expected. But the group’s decision won’t have a long-term impact anyway, says T. Homer Bonitsis, a finance professor at the New Jersey Institute of Technology.

No matter. OPEC essentially is irrelevant when it comes to affecting oil pricesCLF6, -3.81% LCOF6, -4.40% which are likely to fall further, said Bonitsis, associate professor of finance at the New Jersey Institute of Technology.

Bonitsis offered his views in the wake of the OPEC decision, an outlook for oil prices and thoughts on Saudi Arabia’s strategy to defend market share, and discussed key long-term influences for the market.

Here is an edited version of his email interview with MarketWatch:

Question: Will OPEC’s latest decision have any sort of long-term effect on the oil market and if so, how?

OPEC is non-relevant in terms of its ability to affect the price of oil. So any decision by OPEC will not have a long-term effect on the oil market. There are too many OPEC quota-chiseler countries and non-OPEC production countries that cast a shadow over the effectiveness of OPEC maneuvers.

Q: Where do you see oil prices, say, after next year and beyond?

What is certain is that oil prices will fluctuate. Having said this, given the disarray in OPEC and non-robust economic growth in China and Europe, oil prices will remain weak and will probably test the $30 a barrel price sooner rather than later.

Q: What do you see as the biggest long-term influences on the oil price?

The dominant factors strategically influencing the price of oil would be the pace of technological change in the extraction of oil—e.g., fracking has made the U.S. a major oil producer—and in innovations that allow substitute sources of energy—e.g., fuel cell batteries for the electric car.

If history is any guide, there is a secular downward trend on real oil prices.

Q. How low can oil prices go before Saudi Arabia gives up on its fight for market share, and do you think it will have succeeded in pricing out its non-OPEC rivals by then?

The Saudi strategy of attempting to knock out competitors by using predatory pricing is not a game changer long-term…Some producers may shut down temporarily, but will reopen when prices recover again. Indeed, some producers may go bankrupt—only to have their assets sold at bargain prices. The new investors in these assets have a lower fixed cost structure to produce oil; in essence, creating a lower-cost competitor!