In the wake of the financial crisis, central banks became new powers in the land. Without bold interventions by the Federal Reserve in the US and the Bank of England, much of Wall Street and the City would have vanished down a black hole.

Similarly, it was only Mario Draghi’s pledge to do ‘whatever it takes’ to save the euro in 2012 that kept the single currency afloat.

Central banks seek to keep out of the political fray and remain neutral. So I was a little shocked during a visit to Athens earlier this month to be told by a former senior Greek central banker that he regarded the government headed by Alexis Tsipras to be dominated by ‘Stalinists’. 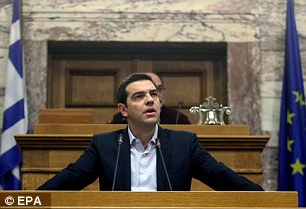 He added that sensible citizens were doing what was logical in such circumstances and stashing caches of euros under their beds.

Private thoughts have become public reality with the Bank of Greece warning of a ‘painful course’ if the Greek government fails to reach a deal on rescue terms.

The central bank says in such circumstances a default would become inevitable and Greece would have to exit the euro and eventually the European Union. The remarks are pointed given that most polls show that the vast majority of Greeks still believe in the single currency despite the hardships delivered.

The same report documents the scale of capital flight with €30billion leaving the country between October of last year and April 2015. That is before the current intensification of the crisis that has seen the departure of a further €5billion or so a week.

In the classic symptoms of a country on the brink, everyone with the ability to shift money offshore has done so.

Draghi at the ECB is doing all he can to help, having supplied €110billion of emergency lending to keep a near-bankrupt financial system afloat. Worryingly for the rest of the eurozone, much of this cash has been provided against dodgy collateral.

Tsipras might do well to look at the pessimistic scenario provided by Oxford Economics which, looking at past crises, suggests that GDP could fall by 30 per cent after a Grexit and then recover by 2 per cent a year.

That, the forecaster says, would take output to 57 per cent below pre-crisis levels, making it the second worst recovery from crisis for any country since the 1980s and the Latin American debt debacle.

Admittedly, Oxford Economics doesn’t think it will be that bad. But the disgrace that would follow would be politically contagious and fuel populism across the whole eurozone.

A more moderate outcome, which is what Syriza must hope for, is a 4.5 per cent further decline in GDP and then a strong bounce-back over the next five years.

But it would be far from smooth, given that the banks would have to be closed and probably nationalised as in Iceland and Ireland. It is not clear how much weight the Bank of Greece’s warnings will carry. In a more rational political setup, the description of the need for a deal with partners as a ‘historical imperative’ would be hard to ignore.

At the refurbished space age NatWest branch close to the Daily Mail in West London, the bank has done its best to replace the staff with electronic terminals. Fortunately, there is still a cadre of excellent and helpful bank advisers on hand to assist the digital dissidents, like this writer, in a moment of need.

It is a bit disconcerting to find that behind the flashing screens and bright furnishings, parent Royal Bank of Scotland is still struggling with IT systems.

One of my memories of Fred Goodwin, the former chief executive of RBS, is of an introduction to his head of IT at a social event.

It was followed by discussion about how RBS had been able to carve billions out of costs by piggy-backing all the banks and insurers it had taken over, on the back of the super-efficient RBS systems.

We have learned since 2012 that this was another disastrous Fred legacy. Despite spending £2billion a year on IT and an extra £750million since the last meltdown of 2012, some 600,000 RBS clients have found themselves cut off from receiving payments and making direct debits as a result of the latest snafu.

One suggestion was that current chief executive Ross McEwan should take the punishment in a reduced bonus. A better idea would be to grab back a slice of Fred’s overripe pension.

There are few more comforting sights in Britain than a country kitchen with a AGA Rangemaster stove ready to warm you up after a bracing walk or hack across the Downs.

With due respect to our American cousins at the Middleby Corporation on Toastmaster Drive in Elgin, Illinois it is hard to believe that they can have a positive influence on such a totemic British firm. It would be nice to see the AGA board, headed by former House of Fraser chief executive John Coleman, show the interlopers the oven door.

British manufacturing, jobs and culture depend on it.